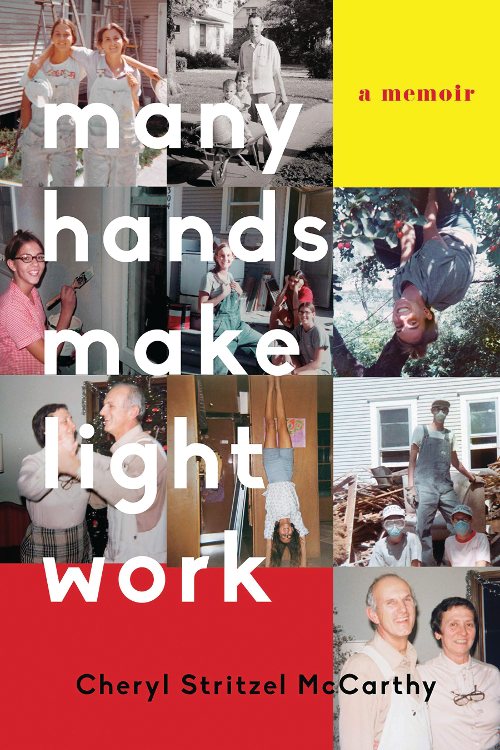 Many Hands Make Light Work is a primary-colored memoir of the recent past. It depicts growing up in a large family in Ames, Iowa, in the 1960s and ’70s, the tones of the story vivid and bright against a backdrop of an increasingly volatile world.

Cheryl Stritzel McCarthy’s memoir is a love story to old-fashioned values and hard work. She and her four older siblings and three little brothers, affectionately called “The Lids,” don’t get to slack off in the summers and school breaks — their father puts them to work, doing what we would now call “flipping” houses to get them ready for renters and college students in the Campustown part of Ames.

Implied though not outright stated is that this was the Right Way to grow up, with everyone in a family pitching in, no idle hands. Everyone was up at the crack of dawn on a snowy day to shovel the walks in front of all the rental properties. Food and time were never wasted.

There’s no central conflict to this book, no major obstacle to overcome — Stritzel considers a family with nine children an asset, rather than an obstacle. The era’s counterculture and the Vietnam war are referenced more as something happening “out there” than to the family in Ames.

The outside world sneaks in through guest characters; the college kids who rent space from the Stritzels come from as near as Iowa and as far away as China. These students, and a stop at a gas station in a black neighborhood in Chicago, are treated as delightful meetings with other people, rather than viewed as a source of concern.

This is a rollicking piece of Americana, and for 300 pages we get to feel that we are a part of the Stritzel family, working hard and playing together, making up songs about our families, fighting over whose turn it is to wash the dishes and making up soon after. The Stritzels are a classic example of an Iowa family: hard-working, dedicated and true to their school.

This article was originally published in Little Village issue 269.