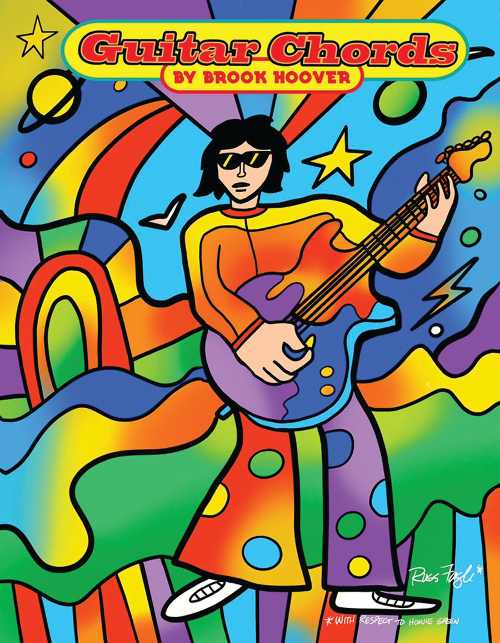 Brook Hoover is an Eastern Iowa music scene staple. He plays out every week, whether it’s a solo gig with his cover band the Flaming Camaros or a tour stop with his surf-rock group the Surf Zombies. When he’s not in the spotlight, he’s teaching guitar to folks from the very young to the, well, older. His classes are tailored to the goals of the student, but also include bits of his colorful history playing guitar. Usually the student comes home with some hand-illustrated sheets of paper with exercises. I have a three-ring binder of them I keep in the open back of one of my amps from the lessons I took.

At the suggestion of a student, Hoover has self-published his first book on playing the guitar. Guitar Chords By Brook Hoover is part memoir, part reference, part how-to — ultimately, it’s Brook Hoover in book form. Every page is lovingly illustrated in pen and ink: a testament to his love of teaching music.

When you see the book with its brightly illustrated cover, done by local artist Russ Fagle, you can’t help but pick it up. When you open it, you are immediately greeted by a collage of photographs of Brook: school pictures, photos of him in bands over the years, and of his family and guitars (lots of guitars).

As its title suggests, this is a chord book. If you’ve been playing guitar for a while, chances are you’ve run into some version of this. They’re tablature indexes showing all of the various chord shapes. Seeing these all drawn out by hand is impressive, but the true fun exists in the margins of the pages, where he puts little comments, like the one on E minor: “Open strings rule!”

Beyond the chord charts, he has tips on how to strum, and covers the magical “circle of 5ths” and various blues progressions; he also he has a whole page of chords used by the Beatles. The book is a potpourri of things that he teaches his students; in that regard, it’s also the textbook for his guitar lessons. But even if you aren’t taking lessons from Hoover, the book is really a great primer for anyone who has had some experience with the guitar.

“Start at the beginning and work your way through if you want,” he advises in the book’s forward, “or start at the back and skip around. There is no point A to point B in my opinion, and I like a little chaos.”

Paging through the book, I can’t help but be awestruck by the amount of effort he put into illustrating each page. In these days of being able to use a computer to produce a book like this, Hoover steps back and pours his heart into it. He offers this bit of heartfelt wisdom: “I sincerely believe music saves lives and improves nearly everything it touches.”