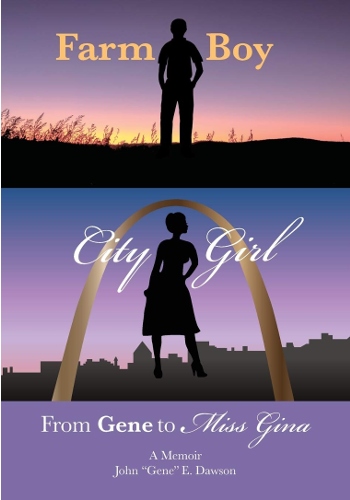 John “Gene” E. Dawson’s memoir Farm Boy City Girl: From Gene to Miss Gina, A Memoir (MiRiona Publishing) blends personal narrative with the history of his family and the times in which he lived (1931-2020), chronicling his life as a genderfluid gay man coming of age in the changing cultural landscape of Iowa, St. Louis, Missouri and the United States.

Displaying a candid gift for storytelling, Dawson recounts his struggles for acceptance and personal growth while refusing to compromise his identity. Along the way, he survived family tragedies, legal persecution and social prejudices.

Dawson was born to a farming family in the Armah community (Dayton township, Iowa County, Iowa) on Feb. 18, 1931. Like many families during the Great Depression, the Dawsons fell on hard times.
“Being a child, I didn’t realize we were living in poverty as my parents deprived themselves so I would have milk and other necessities,” Dawson writes.

Blossoming into young adulthood, Dawson came to terms with his feelings and desires, clashing with what was commonly expected of “good farm boys” from rural Iowa. With the sense of liberation experienced by a bird freed from its cage, Dawson spread his wings across the country in the early 1950s. He explored Chicago, Greenwich Village and Miami, seeing his “first drag (female impersonator) show in Cleveland, who, to me, were like movie stars.”

Dawson reminds readers this was during “the era of McCarthyism, fear of communism, the bomb and crew cuts,” where police raids on gay bars “were not uncommon and to be caught in drag in public was a crime.”

Dawson’s commitment to his Catholic faith as a source of strength is another fascinating aspect of his story, rejecting sermons preaching “punishment, fire and brimstone.”

“We gay humans are God’s children made in His own image and likeness,” Dawson writes. “I don’t think God would create gay, lesbian, bisexual or trans children if He didn’t have a plan for us. I don’t think he wants to pitch His children into the fiery abyss.”

In a heartfelt foreword, Tamara Dawson Bonnicksen, Dawson’s niece, calls him “the family matriarch,” because he was “the oldest of his first cousins on both sides of the family and the best at keeping touch and sharing stories about his childhood and relatives who have passed away.”

Dawson started writing his memoir in 2003-2004 at age 72, completing the book 10 years later and waiting another five years to publish it. Photos of Dawson along with family pictures accompany these recollections.

An excerpt of Farm Boy, City Girl appeared in the anthology Sweeter Voices Still, and Dawson’s story will be featured in the upcoming documentary Gay Home Movie by filmmaker Geoff Story.

As eloquently phrased by Bonnicksen, this book “is a gift to Uncle Gene’s family, a gift to Iowa history lovers, and a gift to LGBTQ men and women.”

This article was originally published in Little Village issue 293.