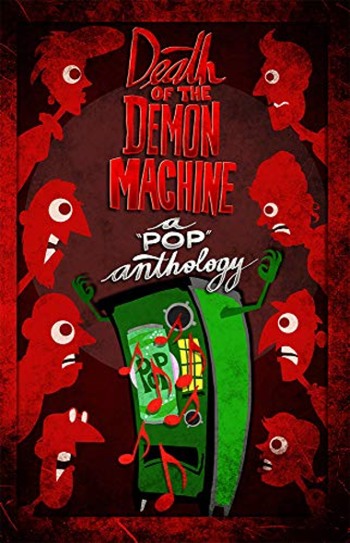 The backstory begins like this: Imagine Other Worlds with Authors (I.O.W.A.), a yearly multi-genre book signing event that began in the mid-2010s to uplift and highlight regional writers, was once plagued by the presence of a soda machine stuck in a musical loop. Throughout their entire event, the thing repeated and repeated and repeated. So, like all creative professionals faced with an attack to their sanity, they decided to turn madness into creative energy. They wrote about it.

The result is this anthology, published in paperback at the tail end of 2020 and out this past Jan. 1 on Kindle. I was sucked in, as anyone would be, when frequent Little Village collaborator Blair Gauntt recently shared the indelible cover design he created for it on social media. His style is well-suited to this kind of tongue-in-cheek humor. His whimsy deepens the delight of the reading experience.

Death of the Demon Machine: A Pop Anthology is a genre-spanning, short and clever exercise in wish fulfillment. Each tale is a different author’s take on a mythology, origin story or satisfying demise for the offending beast. It runs the gamut in terms of quality, as well, with a few slow starts in an overall enjoyable experience.

The collection doesn’t credit an editor, and that lack is felt in some stories more than others, as though the individual writers were each tasked with having their own pieces edited and some just — didn’t. However, the arc of the anthology works out beautifully, with the funniest stories (including Craig Hart’s “Demise of the Liquid Refreshment Dispensement Device”) landing right at the crest of the wave and the longest, most intricate tale (“Senior Year Soda,” by Stephen L. Brayton) offering a satisfying denouement.

A few stories in the collection really stood out. Hart’s piece, while sometimes (intentionally) walking that thin line separating funny from corny, was at several points laugh-out-loud hilarious, easing a reader into a sense of comfort. Reading Beth Hudson’s “Daimonas Ex Machina” was like chatting with an old friend. It’s an incredibly tight story — the shortest in the collection — but manages the most honest character and scene work, and it finds time to drop gems of phrases like “caught in the fascination of the impossible.” And “Ticking,” by David Taylor II, was a surprise treat, a delightfully disturbing sci-fi romp.

You can feel the joy and camaraderie baked into Death of the Demon Machine. Coming out in the wake of I.O.W.A. having to go virtual due to COVID-19 last year, there’s something of an ache to the nostalgia of authors gathered in a room, facing off against a common enemy. And there’s something very engaging and quintessentially Iowan about the joy that the writers take in one another, in the stories more literally set at the event itself. It’s amazing what demons we can slay when we come together.