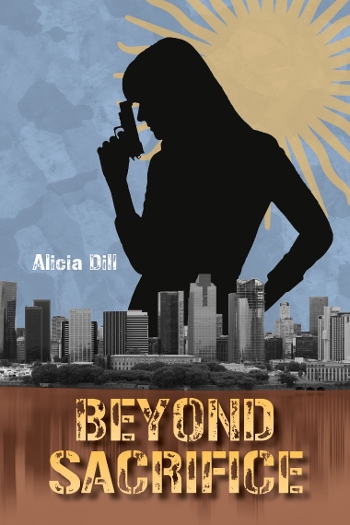 Cedar Rapids author Alicia Dill will be reading from her forthcoming novel, Beyond Sacrifice (Circuit Breaker Books), this month for Prairie Lights. The virtual event will also include a conversation with Sara Maniscalco Robinson, founder of Veterans’ Perspective.

Beyond Sacrifice, Dill’s second novel, tells the story of Concepcion Chapa, a woman of many identities. Chapa is an orphan, an Army veteran and a special agent working for the FBI. She even has ties to the CIA due to her parents, both CIA agents, having been killed in the line of duty. However, when Chapa learns that her parents might still be alive and operating undercover, she forges a new identity and joins the CIA as an assassin-for-hire in order to find her parents and get the answers she needs.

Chapa, similar to fellow fictitious operator Jack Reacher, does anything necessary to accomplish her goals. She fakes her own death, abandons her life and friends entirely and undergoes extensive plastic surgery in Brazil to shape herself into her deadly new identity, the globetrotting assassin Sofia Paltrini. As Sofia, Chapa transforms into a cold, killing machine, using her beauty, strength and an array of weapons to eliminate her targets. From “The Farm” in Virginia to a CIA blacksite in Kosovo to a picturesque Italian villa, Beyond Sacrifice takes readers on a wild, bloody trip around the world as Chapa kills her way to the truth.

Needless to say, Chapa’s descent into the murky, morally ambiguous underworld of espionage and political assasination is beset with shady characters and dirty deals. She can’t even trust her CIA handler, Charles, a man she loves. A quick read at 250 pages, Beyond Sacrifice offers readers enough twists and unexpected turns for a novel twice its length. Dill’s intimate familiarity with military culture, lingo and dialog serves her well in the brutal, terse world Concepcion Chapa inhabits.

Dill’s experience as a woman serving in a notoriously misogynistic industry seems to have crept into Chapa’s worldview too: “In the military, the male soldiers were constantly trying to show me an easier way or a faster way to do something,” Chapa says. “The mansplaining was neverending in this line of work.”

Despite its occasional feminist messages, it is worth noting that Beyond Sacrifice falls into the culture of fetishizing Special Operations Forces (operators) that, post-9/11, podcasts like Joe Rogan’s and grifters like Black Rifle Coffee have helped to sell to millions of Americans as a lifestyle. Though recent revelations about real life operators have tarnished any notions about the valorous or sexy nature of actually working for the CIA (don’t Google “SEAL Team 6” and “canoeing” with a weak stomach), Beyond Sacrifice is still an enjoyable thriller. Fans of spy thrillers or pulpy action novels will find something to love in Beyond Sacrifice and in Chapa, a feminine combination of the brutal focus of Reacher and the cunning and seduction of James Bond.