Waterloo Cedar Falls Symphony: Between Bach and the Blues

Waterloo Cedar Falls Symphony: Between Bach and the Blues 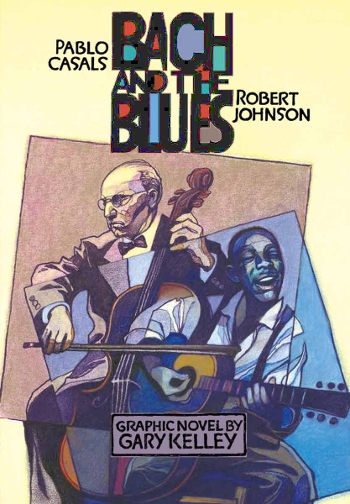 The third week of November, 1936. Thanks to a brief story on National Public Radio, illustrator Gary Kelley learned the odd synchronicity of that moment, and decided to spin it into a graphic novel, his second, following 2021’s Moon of the Snow Blind. Like that first foray into the medium, Kelley brings his considerable talents to bear on history, this time taking inspiration far from his home in Iowa.

Bach and the Blues (Ice Cube Press), released May 1, looks at the considerable impacts of two very different musicians, Pablo Casals and Robert Johnson, who coincidentally were both recording seminal albums that same third week of November, 1936, while the world was unraveling around them. Johnson traveled from his home in Arkansas to a hotel in Texas; Casals also made a trek — to London, England, to record at the now-iconic Abbey Road Studios.

Kelley, whose bio reveals no formal study of history, once again manages to find a certain elegance through his ability to pluck specifics from the past and identify the echoes. In this case, there is so much more reverberation between the largely dissimilar lives of these two men than just this one coincidence and the skill with which they performed.
This book does a heart-wrenching job of universalizing Casals and Johnson’s experiences and helping to situate the reader in time with reminders that the tragic rise of fascism in Europe was parallel to the ignominies experienced by Blacks in the American South in the early part of the 20th century. The example of Jesse Owens, superstar of the 1936 Olympics in Germany who was among the non-Aryan athletes Adolf Hitler chose not to acknowledge or celebrate, is used to great effect to illustrate the fact that the evils faced by both Casals and Johnson were truly one and the same.

The differences between the two musicians are many, and Kelley, in his brief biography of each, makes this clear. Johnson lived only 27 short years; Casals, who was 35 before Johnson was even born, died at 97. Cellist Casals made his Carnegie Hall debut at age 27, which guitarist Johnson would have matched had he not died an early, violent death.

But both enjoyed a vast popularity early in their careers, and no doubt both felt the weight of fame. That weight, especially considering the time in which they lived, is evident throughout Kelley’s work, in heavy lines and powerful use of darkness.

I had been anticipating this book since I first saw Kelley mention it on social media months ago, and it did not disappoint, except in one respect. The book is entirely in black and white, and while it is undeniably beautiful, the tease of colors on the cover left me wanting more. My hope is that Kelley will eventually release full-color prints from the pages of this story, because the color work on the cover, especially how the title is set, is phenomenal.

These stories have only a single formal point of connection, but Kelley’s formulation of the era in which both Johnson and Casals lived is painful in an awakening way. His curiosity is evident throughout the book; if he employs research assistants, I envy them their work! And I can’t wait to see what moments in history pique Kelley’s curiosity next.