'Moon of the Snow Blind' Public Reception with Gary Kelley 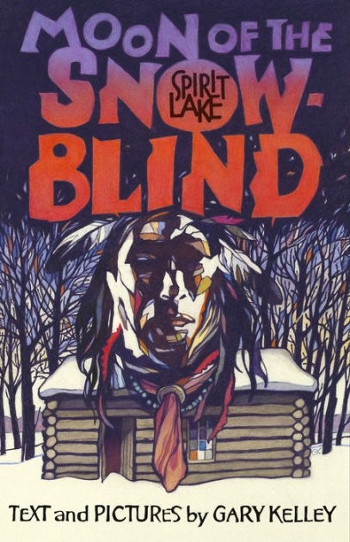 As a Midwest interloper, I’d never heard the apparently ubiquitous story of the Spirit Lake massacre before encountering this new graphic novel. Of course, we had our own legends of “terrifying savages” back in New Jersey (look up the Jenny Jump House sometime if you’re interested in such things), so I know the drill: No matter how progressive the region now, there are always some lingering tales of poor innocent white settlers and the native populations that terrorized them.

It’s 2021. It’s long past time to revisit those stories — all of them — with a damn sight more perspective and grace.

That’s exactly what Cedar Falls illustrator Gary Kelley does in Moon of the Snow Blind (Ice Cube Press), his first graphic novel and an exploration of the history of Spirit Lake that provides more context than a simple one-sided view. Although he draws liberally, through direct quotes, from Abigail Gardner Sharp’s autobiography, History of the Spirit Lake Massacre, he also conducted a significant amount of supplemental research about the era and the region that is evident in his text.

I am not Indigenous, so I do not feel confident in judging the balance of blame in the retelling. Certainly, though given backstory and clarity of motivation, Inkpaduta of the Dakota Sioux still looms large and villainous, and there is no minimizing of the death toll. But the white settlers are not all innocent victims; they are themselves clear interlopers in Iowa. And the unfathomable patience that Inkpaduta exhibits (and the inequities and indignities he suffers) prior to the massacre are laid out clearly as well.

Kelley’s storytelling and art style go a long way toward honoring the promise of the book’s front matter (“… two sides to every story”). There is a particularly effective set of panels early on, in the chapter “June 1856, The Moon of Red Strawberries,” where Rowland Gardner, father of Abigail, is telling his family about comparisons between the Iroquois in New York and the Dakotas in Iowa. His speech and face are both broken between four panels making the top two-thirds of the page, a visual cue as to the brokenness of his logic and racism.

The chapters are all named for the month they cover and the common Indigenous name for that month. Moon of the Snowblind is March 1857, the month of the massacre itself. For those unfamiliar, Inkpaduta and his followers came upon the Gardner family and the few other families that had settled near them, seeking food. The families all were killed, with the exception of Abigail, who was brought along with the Dakotas when they left. Three more white women joined her as the group traveled West in search of abundant buffalo and land free of settlers. Her return was eventually negotiated by a group of Christianized Dakotas sent by the U.S. government. She passed away in 1921.

The starkness of the black and white art and the terse, tense text combine for a story that hits all the points with a minimum of moralizing. The repeated motifs of skulls and corvids convey an eerie mood and force the reader to sit with the discomfort evoked. Moon of the Snow Blind is a powerful exploration of the American “frontier” and of the compromises that made it what it is today.