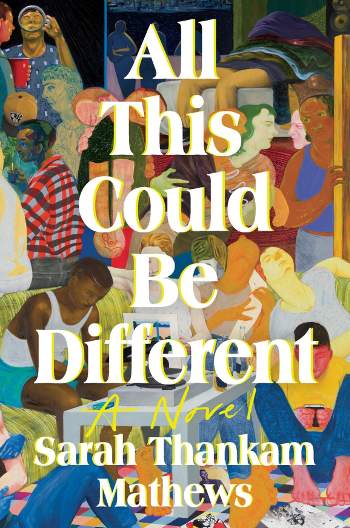 When I started reading All This Could Be Different (Viking, 2022) by Sarah Thankam Mathews, I was nervous about the passive voice, tonally similar to other books I’ve recently read which I felt lacked substance. But this is intentional. Our narrator, Sneha, is apathetic, barely teasing interest, she merely exists for the first part of her own story.

When Sneha does express something early in the book it’s haunting and familiar: “This is what my parents wanted for me, what everybody wanted. To be a dish laid out before a man’s hunger. To be taken, to be quiet. Disappear into hair and parts. Disappear, in time, into marriage and motherhood.”

Subtly, cleverly, as Sneha gains interest in her own life, her voice changes, the book becomes harder to put down, her interests not just alluding to a future in which she has something to say but finally saying things. Mathews gives an expertly crafted example of how to write character growth. Sneha may be the most multi-dimensional character I’ve read in recent years. Her coming-of-age is (like it is for many of us) framed as a love story, but is far more about finding out what love is than holding on to romance. It is heartwarming and challenging.

All This Could Be Different deals with trauma and coming-of-age, the relationships we have and reject as we find ourselves as young adults, but while we follow Sneha through her revelations and crises, we are not forced to endure any of those horrors. Mathews saves us the trigger warning by showing impact instead of its catalyst.

Sneha’s opacity and malleability challenged me to look inward—it felt like learning a funhouse mirror was not at all warped — in moments when she was honest with herself: “I did not know how to explain this stubborn love for my parents that I staggered under, iridescent and gigantic and veined with a terrible grief, grief for the ways their lives had been compost for my own.”

For a book that could be difficult and dated (it takes place in 2013), Mathews has created something universal and lingering. We have all experienced the feeling of being alone with ourselves and longing for something else. We have all been surprised by love. Sneha “felt dizzied by all of it, by how in my hands her hips felt like the time I found an animal’s skull in the underbrush of my family’s home when I was a child and lifted it into the air: this hard, breakable, animal thing.” It is a fast read with a satisfying ending.

The shift in Sneha’s ideologies, prejudices and self-image as she comes to live outside of her head is slow and raw and palpable. That’s one of the things that makes the shape of Sneha’s story so powerful: it could be a day in the life but it is, instead, an evolution.

You wrote a novel before ATCBD. How were those two writing experiences different?

I wrote All This Could Be Different, in a fever dream, mostly over the summer and fall of 2020, after working for seven years on a completely different project, after having written nearly 800 pages of attempt at it. That project ended up feeling bloated with too many characters, digressions and themes. I felt determined to put every lesson of failure from that previous project to use when writing ATCBD, which felt in many ways like my second round in the ring.

I left the characters and setting and premise of that previous project behind, thanking them for what they’d taught me. “Keep it tight and propulsive this time around,” I warned myself. “Seduce the reader; first withhold and then give them something good, again and again. Make them laugh. Pay attention to structure. Only one year of time will be covered in this novel. No more than four important characters at any point. Separate yourself emotionally from the protagonist. Everything that happens has to have a downstream effect or it gets cut.”

Sneha’s development as a person changes the shape and tone of the narrative. I wanted to show this young person growing up and becoming themselves. In order to do that, you have to show change. I wanted to show a self being formed through other people, write a novel of interdependence and, if you will, a compound love story. I believe that the sentences and the thematic choices have to be in a happy marriage, as a novel. I would watch YouTube timelapse videos of plants blooming over months, and it supplied me with an effect I tried to recreate for the reader: petal by petal, this prickly, compressed narrator opens up, to her world, but also us, the readers.

Did you intend to write about othering/trauma/identity or was it a consequence of the story you ended up telling?

I wanted to write a novel where the main characters were as deeply imagined as I could pull off. Sometimes, for me, there is a flattening, overly causal quality to centering trauma in literary narratives. I prefer to think about it through the lens of personal history: What is the sum total of this person’s past, and how do they relate to the different pieces of the past, with denial or acceptance or nursing of wounds or something else entirely? Sneha does not cherish the fact of her trauma — she denies it. She’s a proud, pained, spiky, multifaceted character who sometimes hurts, sometimes gets hurt, and I saw my job as representing the intricacies of her full self, as she navigates the painful, glorious journey of what it means to find a home and make a life.

Ultimately both deal in stories we tell ourselves about who has worth and who has power. And the fact that the world as it is is a made thing, and by that logic can be remade. I think that’s a quiet throughline that runs through ATCBD.

Why do you write?

Books saved me again and again when I was young and lonely. I would like to do that for somebody else, someday. I think doing language is what makes us human, is one of the greatest measures of us as a species, the closest thing I have found to a “meaning of life.” I write to think through what’s difficult to me, to address and commune with people I’ve never met and to give myself to the future.

This article was originally published in Little Village’s September 2022 issues.