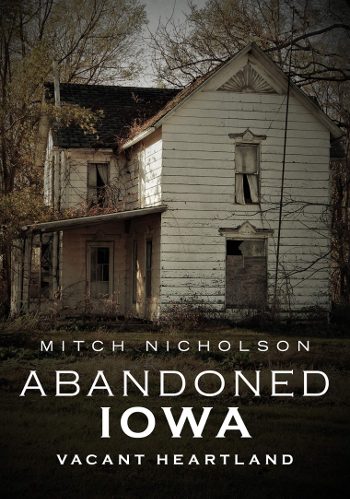 The origins of Abandoned Iowa can be traced back to the fall of 2010, when author Mitch Nicholson was still an English undergraduate student at a small private college in Marion County. Academic pressures combined with a hot, stuffy dorm room and the claustrophobic setting of a small campus nearly proved to be unbearable and Nicholson “needed an escape,” as he writes in the book’s introduction.

Opting not to return right away to the “sauna of a dorm” when classes were done for the day, Nicholson often jumped in his car, drove to a nearby gas station to buy some cheap cigars, and hit the road with his iPod within reach and the air conditioner cranked up to full blast.

“As I was not native to the region,” Nicholson writes, “I found myself spending a lot of time simply driving around for no other reason than to find out what the county had to offer.”

It wasn’t long before he started noticing abandoned structures during his excursions. Describing them as “resoundingly quiet, still and nonjudgmental,” Nicholson says, “Their aesthetic appealed to my anxiety-filled conscious.”

Nicholson had the idea to document these locations, registering the username “Abandoned Iowa” on a blogging service that same year. After moving back to his hometown and graduating with a bachelor’s degree in 2013, “the urge to seek out abandoned structures persisted.” To this day, the photo-journalist project is still being kept alive on social media — and it resulted in the engrossing book Abandoned Iowa: Vacant Heartland.

Nicholson’s photographs of decrepit bridges, forsaken farmhouses, deserted mom-and-pop stores, empty churches and orphaned schools in small towns across the Hawkeye State are haunting and inspire a sense of awe. Captured with somber beauty, these images have the potential to steer readers into eerie emotional territories, as they did for me, even evoking a sense of nostalgia or loss for places I’d never heard of, let alone visited.

It can be easy to forget that these images depict tangible structures that once served fairly mundane purposes in the everyday lives of Iowans in these communities and visitors who happened to come across them — many of whom are now gone without a trace. As a pandemic and economic hardship spread throughout the state, more sites once familiar to us will endure the same fate.

“My role is to capture, document and present the structures as they are — regardless of their future,” Nicholson says.

The images are accompanied by text providing details about the structures, their locations and the historical context that led up to their inglorious demise. Unsentimental and objectively captioned, the information contained herein provides fascinating dimensions to this gallery of forgotten monuments of Iowa life.

Nicholson has visited over 200 abandoned structures, “each with a background and history as rich as Iowan topsoil,” finding that there are consistencies and patterns that emerge: “Everything on Earth,” he writes, “including the planet itself was once cosmic dust. And to dust, it desires to return.”

This article was originally published in Little Village issue 287.