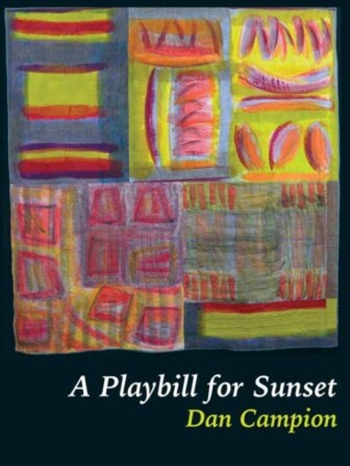 Formulaic poetry seems to be simultaneously under- and overrated, something force-fed us by teachers and then never seen again — as though only the archaic men of our textbooks were allowed to use the respective forms. Truthfully, formulaic poems have never actually left the literary milieu.

In A Playbill For Sunset (Ice Cube Press, 2022), Dan Campion brings new light to the sonnet, the form which dominates this book. Campion offers tribute to his intellectual and artistic heroes in both form and name.

Opening with “Time’s Arrow,” Campion advises readers in his very first line, “We are not in any rush,” which is true of the anthology as a whole. He takes his time meandering through nature scenes and emotional revelations, never hurrying a poem or belaboring a point. His poems are leisurely, and he seems to want his audience to experience them as such.

Much of the content of these deliberate, gentle poems will be inaccessible to a large swath of the potential readership. The poems are sometimes about, if not overtly referencing, esoteric intellectual content. I found myself keeping my search engine open throughout reading, realizing early on I’d need background information on some references, as with the poem “Das Boot.” The selection references surrealist and dadaist artists, Chicago architecture and the Greek mythological character Proteus. While, in the end, I liked the poem, it was necessary that I ingest the background information and come back to it later to understand it. That said, “Das Boot” makes the important point that art about war often makes war more palatable, despite war being surreal and traumatic.

This, maybe, is the power within a leisurely book of poetry. When absorbed as it’s meant to be — slowly and deliberately — the points are made and internalized in a subtle manner. Favorite poems of mine used concrete images as metaphors for the human condition. In “The Parrots,” there is no rush to get to the point. It opens describing a collective of birds and the life of parrots in general, slowly distilling the poem to its final three lines, “It’s marvelous how we clutch, over time, / a perch so slick, so worn, so hard, so slight. / Flung to the gutter, even there we’re chic.”

This ending is obviously not a heroic couplet (the final two lines of a traditional sonnet, which rhyme with each other, while the preceding follow an ABAB / CDCD scheme). Other of the 14-line poems do not follow the formal rules of the sonnet, and a small handful of the poems are not sonnets at all. Longer poems with shorter lines offer a literal break from form, but they also signal narrative and rhythmic change, a break from expectations. My favorite of these is “Out on Route 6,” which feels like the soundtrack for a roadtrip in the country. Campion is your companion and nature is your guide.

So much of this book feels like an homage to transcendental poets and Americana that it almost seems out of time. Campion, maybe, lives in the woods learning writing from birdsong and watching both sunrises and sunsets. A perfect set of bookends, the “Time’s Arrow” line “We are not in any rush” is balanced by the final lines of the collection, closing the titular poem, “A Playbill for Sunset”: “There’s always time. The sun will always set. / In mask and buskins, dusk may answer yet.”

This article was originally published in Little Village’s July 2022 issues.