Carrie Houchins-Witt is a CRANDIC staple both behind and away from the calculator. Over a decade ago, she began putting her passion and skill for numbers into use preparing tax returns for the actors she performed with, learning quickly just how invaluable that service was. She became a CERTIFIED FINANCIAL PLANNER™ professional in 2009 and an Enrolled Agent in 2013; in 2016, she became a Certified Divorce Financial Analyst® professional. But she never strays far from the stage — and of course, in the busy, arts-infused CRANDIC, she doesn’t have to! Her office even shares a building with the Coralville Center for the Performing Arts, a match made in theater heaven.

What do you love most about your job?

I definitely have right-brain and left-brain tendencies, but when I started doing taxes I realized that I love the problem-solving aspect of it. Every tax return is like a puzzle that needs to be put together in just the right way. I love puzzles, and it’s fun for me to figure out the details of each return. It also makes me happy to help people, and so many of my clients are extremely appreciative of what I do for them. Ours is a great community full of people with different skills and I like being a part of the community. I can’t program your computer or cure your strep throat but I can do your taxes!

Can you share (without specifics, obviously!) the zaniest tax circumstances you’ve had to navigate for a client?

Well, the cause of the most difficult and interesting tax circumstances has thankfully gone away. Back in the day, it was challenging to file taxes for same-sex couples who were legally married in Iowa but not in the eyes of the federal government. For a while, I was a de facto national expert on taxes for same-sex couples. Because Iowa was one of the first states to establish marriage equality in 2009 (yay Iowa!!), I had to learn how to help couples file joint returns in Iowa and separate federal returns. Later, when the IRS and Treasury Department started accepting joint returns from same-sex married couples, I had to do the opposite: file joint federal returns for some couples whose state required them to file separately. It’s usually changes in the tax code that cause wacky circumstances, but in many cases, we’re happy about the results — like marriage equality!

Though they don’t necessarily bring zaniness to my office, I do have clients from all over the country and the world. Among my clients are actors you might have seen on TV or on Broadway, composers whose songs you might have heard on TV or on the radio, social media influencers, authors, lottery winners and a popular game show champ. I’ve even prepared the tax returns for a film or two. That definitely keeps things interesting for me! 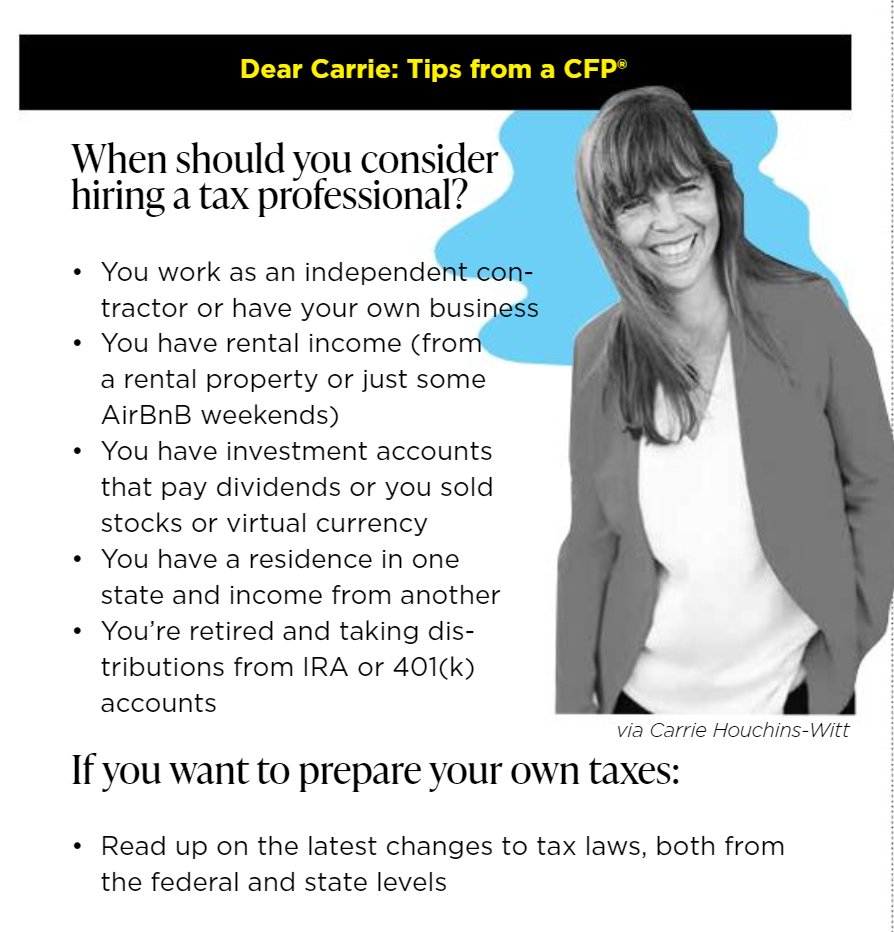 What advice do you give folks who usually do their own taxes about deciding the right time in their life to bring in a professional?

Many people with a regular W-2 job from one state and no additional sources of income or deductions feel comfortable filing their own tax returns (using a simple software product or even a paper and pencil). To these people I say, “more power to you!” Things get complicated if you work as an independent contractor or have your own business; if you have rental income (from a rental property or just some AirBnB weekends); if you have investment accounts that pay dividends or you sold stocks or virtual currency; if you have a residence in one state and income from another; if you’re retired and taking distributions from IRA or 401(k) accounts, etc. I could go on and on. The hardest part of preparing tax returns is staying current on all the changes to the tax codes. During the tax season we just finished, there were retroactive changes made in the middle of the season which made things very difficult for us, and surely for everyone who was trying to prepare their own taxes. Many of my clients have come to me when they received an IRS letter after years of preparing their own taxes, then decided they wanted professional help going forward. It’s different for everyone. My advice to those preparing their own taxes is to read up on the latest changes to tax laws, both from the federal and state levels. The IRS does a pretty good job of highlighting recent changes on their website, so start there.

To date, I’d say my favorite role was The Baker’s Wife in Into The Woods. That was a dream role, and it was thrilling to be able to bring her to life, especially with that cast, crew and production team (at City Circle Theatre Company, directed by Chris Okiishi).

The dream role I haven’t had the opportunity to play (yet!) is Desdemona in Othello. Some may say I’ve aged out of the role, but hey — Meryl Streep played Juliet when she was older than I am now, so why not? I’ve always loved that play and that character. If any CRANDIC companies are planning to produce Othello, I hope they’ll let me audition!

Is performing an escape for you, or do you find that you utilize similar skills in those two parts of your life?

Performing is absolutely an escape! Acting, singing and dancing allow me to flex different muscles and engage my right-brain energy which can be very therapeutic. Inhabiting someone who isn’t me is always a fun challenge and a great creative outlet.

Having said that, collaborating with a team on a play or a musical can be like a puzzle, and my problem-solving skills often get a workout, too. In addition to acting, I’ve been a certified actor combatant and love to choreograph stage combat and violence. So when I’m working on a show in that capacity, it’s an entirely different kind of puzzle to solve.

This article was originally published in Little Village issue 301.