The Bernie Sanders campaign announced on Wednesday morning it will be staging two free concerts the weekend before the Iowa Caucus. Bon Iver will perform in Clive on Friday, Jan. 31, and Vampire Weekend will play an acoustic show in Cedar Rapids on Saturday, Feb. 1.

The Iowa Caucus will held on Monday, Feb. 3.

“There are promises in our constitutional language that are being superseded by money and greed in this country; I believe that Senator Sanders is the only one that has the pedigree, the experience, the courage, and the undying spirit to begin to put these obstacles of freedom to rest,” Bon Iver’s Justin Vernon said in a written statement released by the Sanders campaign.

The campaign press release didn’t contain any statement from the members of Vampire Weekend, but lead signer Ezra Koenig, who backed Sanders in 2016, talked about his support for the Vermont senator
while promoting the group’s new album, Father of the Bride, this spring. 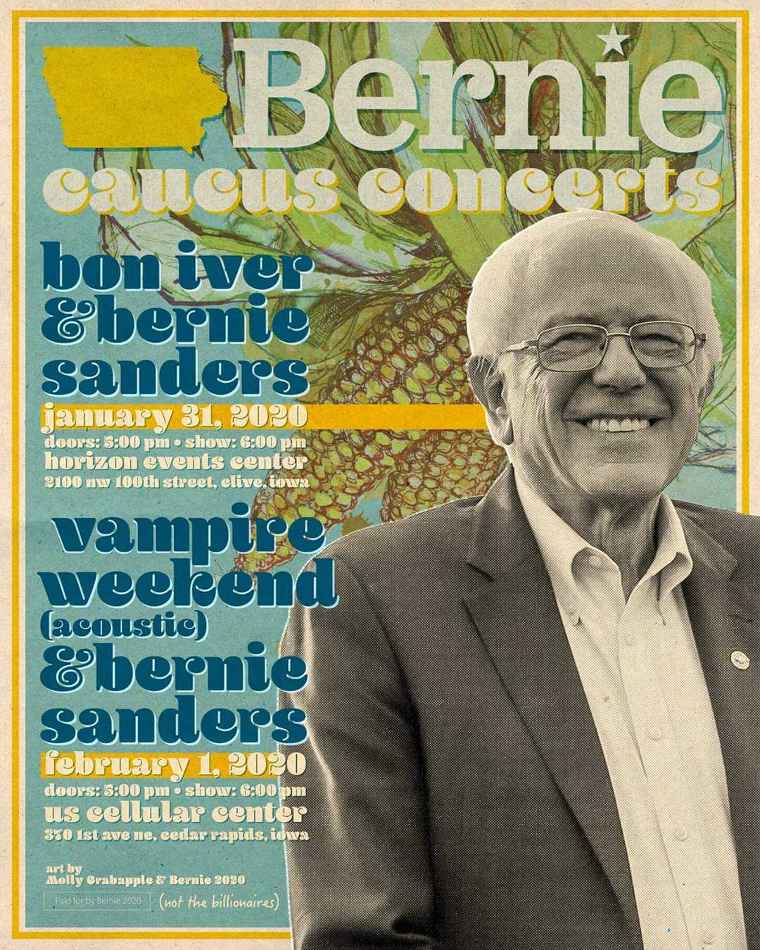 Speaking to NPR in May, Koenig said, “I really try to think back to how I felt in 2016 — and for me, growing up on the East Coast, New York, New Jersey, when I look at somebody like Bernie Sanders, this older, crunchy, independent senator from Vermont, he truly seemed to me like the least controversial candidate on Planet Earth.”

Koenig also discussed Sanders in a March interview with The Times of London.

“I like to believe he’s less of a sociopath than a lot of people who want to be president, but it’s hard to be as excited as I was in 2016,” Koenig said. “That was the first time I felt deeply about a candidate.”

Both concerts are open to the public, and admission will be on a first-come-first-served basis.

The Bon Iver concert will be at the Horizon Events Center in Clive, and is scheduled to begin at 6 p.m. Vampire Weekend’s acoustic show will at U.S. Cellar Center in downtown Cedar Rapids, and is also scheduled to start at 6 p.m.

Vampire Weekend will return to Cedar Rapids for a ticketed concert on Sept. 26 at the McGrath Ampitheatre, as part of their Father of the Bride Tour.