There’s a few key facts about Superman that are pretty universally known. He’s more powerful than a locomotive. He’s able to leap tall buildings in a single bound. And Superman is renowned for being faster than a speeding bullet.

Cedar Rapids had its own Superman. And Art “Superman” Pennington — who lived there from the mid-1950s until his death in 2017 — had his own superpower related to the speed of bullets.

Pennington described that power in a 2002 interview about his life that was conducted by The History Center as part of an oral history project in Cedar Rapids. He was telling the story of his tryout for the American Giants, a Negro League baseball club, in 1939 when he was just 16 years old.

“The guys got mad at me because I had such a great arm,” he said. “Oh my, I could throw ’em like a bullet.”

The manager of the American Giants was suitably impressed—and not just by Pennington’s throwing arm. In fact, he was impressed enough to offer Pennington the chance to replace one of the team’s players.

“Jim Taylor was the manager, and he saw that I could run like a deer, and I could throw that ball like a bullet, and I could hit that ball,” Pennington recounted in his oral history interview. “So he took me over his shortstopper. That’s where it started.”

Now, thanks to a recent recommendation by the Society for American Baseball Research, Pennington’s years in the Negro Leagues may be recognized as time in the Majors. This long-overdue recognition would finally acknowledge that many of the game’s most talented and dedicated athletes were banned from competing in the official Major Leagues from 1884 until 1947, consigning their accomplishments to a lesser status than, say, extraordinary white players like Ty Cobb or Babe Ruth. A review process is currently underway.

The updated designation would mean, for example, that Pennington’s status as a Negro League All-Star would be recognized as the equivalent of being a Major League All-Star. It would also officially recognize that Pennington made it to the big leagues as a teenager—a rare feat accomplished by some of the biggest stars in the history of the game, from Iowa’s own superstar pitcher Bob Feller to Mickey Mantle, Ken Griffey Jr. and, more recently, Bryce Harper and Juan Soto.

He was so young when he went to join his new team in Chicago that Taylor promised Pennington’s mother he would look after the boy. His childhood nickname, “Superman” — given to him by his mother, the story goes, after he lifted a car by its bumper to allow the placement of a jack when he was 10 or so years old — went to the Windy City with him.

“People come out to see me, they called me ‘Superman,’ and they wondered where I got that name from, so I told them my mother gave me that name when I was a young boy. That’s all they would announce: ‘Superman at bat,’ and I was fast and I could throw. Guys hit the ball to me at shortstop and it would take a bad hop and hit me in the chest. I was never in a hurry ’cuz I had such an arm. I’d pick the ball up and ol’ Pep Young over on first base would yell, ‘Throw it, Supe!’ and I’d shoot it over there. He wanted me to get rid of it so it wouldn’t hurt his hand.”

In the 2002 interview, Pennington recounts his career in an order that doesn’t match the official record. But it is clear that in the late 1940s, after Jackie Robinson and Larry Doby had broken the color barrier in the National and American Leagues, respectively, Pennington’s contract was sold to the New York Yankees. The Yankees promptly sent him to their minor league affiliate in Portland, Oregon.

“It wasn’t too good out there in Portland. They thought maybe all the stuff that Jackie Robinson went through, it might have been cooled off for the rest of the players,” Pennington recalled of the still-prevalent racial tensions. “But we went through the same thing Jackie went through. Same thing.”

Pennington never got his shot at the Major Leagues as defined at the time, but his lifetime statistics are impressive by any measure. He batted .336 in his Negro American League career, .300 during his time in the Mexican League—an experience he recalled fondly for its lack of racial tensions—and .322 in the minor leagues. Given that .300 is considered a very good batting average (baseball being the only sport in which folks are mighty impressed if you only fail 70 percent of the time), Pennington’s .336 average in the Negro Leagues stands out as a stellar accomplishment. 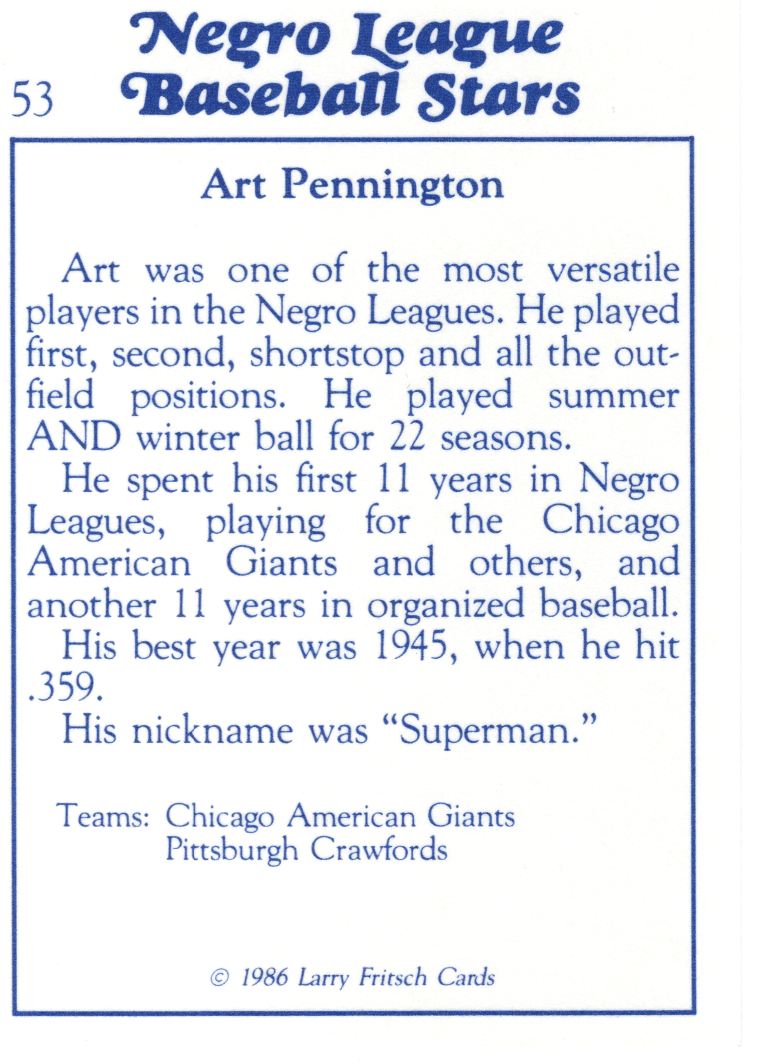 Early in his career, he hit a home run in an exhibition game off of Dizzy Dean, a hurler who had pitched his way to fame with the St. Louis Cardinals. When Taylor heard someone suggest Pennington never would have made that hit when Dean was in his prime, Pennington’s manager vehemently disagreed.

“He hits Satchel [Paige] sometimes,” Taylor said. It’s hard to imagine a higher compliment for a ballplayer at the time.

In the early 1950s, Pennington joined the newly integrated Three-I League, leading that league in hitting in 1952 when he was 29 years old with a .349 batting average. He played Three-I League ball in Cedar Rapids in 1953 and 1954. And once again, so the story goes, he caught the eye of someone who could change his life, just as he had when he was a 16-year-old shortstop with a hell of an arm.

Pennington was working for the local railroad during the offseason of 1955, and a picture of him toting a railroad tie over his shoulder appeared in the Cedar Rapids Gazette. The caption read: “The man swinging the big bat that looks suspiciously like a railroad tie is Art Pennington, former Cedar Rapids Three-I leaguer, who … has been working on the railroad in C.R. since the season ended.”

In one version of the story, Arthur Collins himself, founder of Collins Radio, saw that photo and within a few years, Collins had offered Pennington a job in the company’s main plant. The job offer came with one condition: Collins wanted Pennington to play on the Collins Radio ball club in the local industrial baseball league.

In the oral history interview, Pennington tells the story differently. He recounts his boss on the railroad suggesting he needed to go out to Collins Radio and apply for a job. There, he encountered a woman who knew him from his exploits on the baseball diamond. She gave him some employment tests (and may have helped a bit as well). Next thing he knew, he had a job. However it began, Pennington worked for the company until he retired in 1985.

His baseball career behind him, Pennington continued to rack up an impressive collection of stats in other endeavors. In the early 1960s, he was co-owner of the “Home Run Club,” the first mixed-race dance club in Eastern Iowa. The club was shut down in 1963. The official story was that the building wasn’t up to code, but Pennington was sure that the integrated club was making waves in the community — waves that eventually overwhelmed the club.

Art “Superman” Pennington passed away in his sleep on Jan. 4, 2017. He was 93 years old. His real-life adventures may not have been quite as colorful as the fictional chap who shares his moniker, but Pennington was a hero nonetheless, pushing the country to be better with his skills on the ballfield and with his devotion to the community he called home for more than six decades.

Rob Cline is an avid baseball enthusiast who married into the St. Louis Cardinals fandom in 1994. He was very relieved when Yadier Molina re-signed with the Cards this offseason. He would like to thank The History Center for assistance researching this story. This article was originally published in Little Village issue 292.