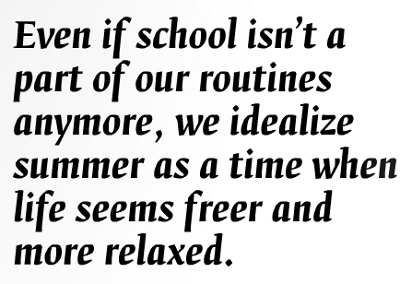 The end of summer is a peculiar time. For no other season are we so compelled to define “the end.” For the last month or so I have found myself and others repeating, “Well, I guess summer’s over because…” And there are a lot of “becauses.” Because the near-downtown neighborhood street curbs are full of old couches and broken chairs. Because City High’s marching band is starting “Heck Week.” Because I’m going to stop my summer hours of coming into and leaving the office early. Because public schools have started. Because University of Iowa students are moving back into the dorms. Because UI classes have started.

Granted, there are some logical reasons for us to mark the end of summer more than other seasons. The list above indicates the most obvious–school starts. But I think it’s more than that. Even if school isn’t a part of our routines anymore, we idealize summer as a time when life seems freer and more relaxed.

A lot of people just hate to see it end. “Endless summer” and “endless winter” mean different things. But when we don’t want something to end, the compulsion to identify its conclusion seems to intensify.

We often say we want winter to end. I enjoy winter, but I have to admit that come late February, I’m ready for it to end, too. But our declarations about winter’s end are expressed in hopes: “I hope that’s the last snow,” and “I hope we’ve seen the end of ice.”
We kind of slide into spring, eventually saying–once the birds are singing regularly and the thermometer stays above 32 degrees for some time–that “I guess spring is finally here!”

Equinoxes and solstices seem arbitrary when it comes to actual weather. On March 21 we’re often grumbling, “Spring–right!” as we’re shoveling the driveway. By the time June 21 rolls around, we’ve already been to the beach a bunch of times and maybe are already at the cabin for summer vacation. By the time December 21 arrives, “fall” is a concept distant in memory, with winter already closing its freezing grip.

Usually we just let the dates slip and slide and don’t get too worked up about when a season begins or ends. “Today” isn’t really germane to our understanding. We just take the weather as it comes, grouse impatiently when the north wind is raw in April and revel in surprise when it hits 80 degrees in October, after the first freeze. Which is how life should be and how we should experience the world: accepting nature’s gifts and booby prizes as they are presented to us.

But not so the end of summer. Ironically, perhaps, because we wish it weren’t so, we seek its specific point. Traditionally, Labor Day has been that “last day.” It makes sense; it’s the final three-day weekend to enjoy one last picnic, day at the beach or backyard barbecue. But that hardly applies anymore. Every year now the newspapers and neighborhoods are filled with cries of lamentation and outrage: School should not begin in August! Summer isn’t over yet!

Iowa law actually requires that public schools not commence instruction before the week in which September 1 falls. That is, unless a school district gets an exemption. And almost every single Iowa school district asks for and gets that exemption. And, every year, editorials spring up like dandelions demanding that Iowa enforce its own laws.

I don’t remember exactly if the schools in Rockford, Illinois (where I grew up) began after Labor Day when I was a kid, but I do know that classes did not start on August 18 and I do seem to remember the eve of the first day of school being signaled by the strains of “You’ll Never Walk Alone,” as Jerry Lewis blubbered his way to the end of the Muscular Dystrophy Association Labor Day Telethon.

Intellectually and emotionally, I have embraced the reality of how seasons are not movies with opening and closing credits. In fact, the transitions are times of fascination–except for August and September. While fall is actually my favorite season, and while I experience joy rather than regret as the academic rounds return, I still become wistful at the passing of long, hot days and a lighter schedule. And so, as the first student papers are coming due to the press and high school football is well under way, I wish Labor Day wasn’t our first break in the school calendar but rather the true last hurrah of summer.

Follow-up note: Kudos to the original Panchero’s at the corner of Clinton and Washington Streets for their new storefront paying homage to the legendary Whetstone Drug Store, which occupied this important Iowa City space from 1890 to the 1970s. My April column argued for the historic and varietal integrity of downtown storefronts and now our locally-originated burrito franchise has gone back to historical photos to replicate the black stamped-metal paneling and black trimmed wood paneling of Whetstone’s. They’ve also uncovered and restored the boxed-in fluted cast iron column at the entrance that had been obscured for many years. Downtown Association Executive Director Nick Arnold was quoted in the Daily Iowan as saying, “Aesthetically, having a downtown with unique and interesting storefronts is just another way downtown Iowa City stands out from the crowd.” I couldn’t agree more.