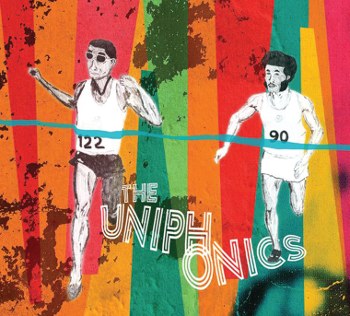 The Uniphonics have been long-time members of the constellation of bands who spearheaded the Iowa City funk and world beat scene in the late-’90s and early-2000s, along with brothers in backbeat Public Property and Euforquestra. While the formula of blending rap with live instrumentation has been done before, the electric jazz and funk of the Uniphonics is a fresh take on it — even given the fact that they’ve been doing it for over 11 years now, and it has been 10 years since their last album, Crawl.

In those 10 years, the original members of the Uniphonics have had time to stretch their creative legs with other projects, and it shows in the polish and complexity of the new music. While it is still recognizable as a Uniphonics record — rap blended with jazz and funk, with the blunted flow of MC Animosity — the addition of more singing and harmony makes the album fall neatly in the R&B pocket.

The addition of Bethann Heidgerken (Candymakers, BEEs) on vocals and rap is a key part of the fit and finish. Her harmonies with Nassor Cooper and Animosity elevate this record and deliver hooks for days. But it’s when she drops rhymes that the listener is really blown back in their seat.

We’re treated to that on the first track on the record, “The Struggle.” Built up of vignettes of people who turn to the creation of music as a way to elevate themselves beyond their downtrodden station in life, Heidgerken’s turn at the mic on “The Struggle” is a laid-back rhyme that recalls another MC-band pairing, Bahamadia with Morcheeba.

The biggest sign of the distances to which the Uniphonics are pushing the sound of the band is on the totally retro, new jack R&B of track eight, “Truly Yours.” The smokey sax over the chiming guitar with the snaps helps deliver the lyrical testimony. “You know that I’m down, make sure that it’s understood, you know that I’m down, give you all the time in the world.”

The soaring harmonies of the chorus make it sound like it dropped right off of an Ashford and Simpson album. “Truly with me, right here, right now/Finally the waiting is o-over!” Is the world ready for a resurgence of ’80s R&B? This song is an argument that it needs to get ready.

With the self-titled release from the Uniphonics we’re reminded how fun and funky their recipe for jazz and rap gumbo is. They spawned during a time when there were more bands experimenting with this combination, and there aren’t many left on the scene. It’s for this reason that the record seems so fresh in a landscape with so many mushmouthed MCs and retread, formulaic beats.

On “Anybody Out There?” Animosity raps, “I hear the new brothers rapping and they sound the same — is it going to be lame?” Uniphonics, with their real musicians and smart MCs, are the star in the funky stellar cluster that should inspire and lead the way to a return to form that’s anything but lame.

This article was originally published in Little Village issue 281.