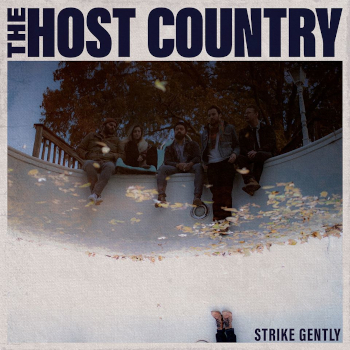 I listened to a lecture once explaining why classic country music has the greatest capacity to elicit sadness among all the genres. It’s in the words. The point-of-view is usually more specific; the details more individualistic and unique to the singer. Where other genres may use a simple lyric like “she’s leaving” to communicate loss, a country song will tell you who she is and how precisely she came to be leaving. It’s often sentimental, to be sure, but the honesty of it is what sticks with you.

Strike Gently is not a country album. It occasionally hints at the genre musically through the instrumentation and intertwining vocal melodies, but it lives most comfortably as a multi-genre experiment spanning the gap between folk music traditions and towering post-rock peaks. But when it comes to the lyrics, it invokes that same country honesty.

It’s heard in the God-fearing prayers of the album’s single, “Fires in Montana,” and its references to the loss of a young mother. Much like the thick clouds of smoke that spread from the titular 2017 wildfires, the loss on this track casts a long shadow over the rest of the album. It places other songs in a different context: lyrics like “We all die alone, I just want to do it with you” on the song “We All Die Alone” or the processes of loss and recovery contemplated in “Holdin’ On.”

“Borderline” feels like it could be the closer in an alternate configuration of the tracklist, but serves here as the true centerpiece of the album. It’s the heaviest song by far, walking that line between sanity and chaos both lyrically and instrumentally. You can hear it in the echoing vocal harmonies and layers of distortion that create the bed of the song’s chorus—built up, deconstructed and transformed throughout the track’s ten minutes of sonic exploration.

The true closer, “Salado,” serves as the culmination of themes explored throughout the rest of the album. The song, built solely on a gentle piano melody, wrestles with pain but also the potential for growth that can come from the passing of a loved one and all the changes it may bring to the other parts of one’s life.

The entirety of Strike Gently is pulled simultaneously by these forces, and that tension is expressed in the honesty of the lyrics of loss laid bare in all its stages and scenes. At the times when it weighs most heavily throughout the album, its gaze turns skyward to explore that feeling of smallness in the wake of life-shattering changes. It’s a prayer to a higher power; a plea to the Lord: If you must strike, please strike gently.

Strike Gently releases digitally on May 1, and it will be made available on vinyl and CD in the near future. The band is hosting an online release event for the album on May 1 at 6 p.m., which will feature songs from guitarist/vocalist Ty Wistrand keyboardist/vocalist Diana Weishaar, as well as an AMA (ask me anything) with the whole band.