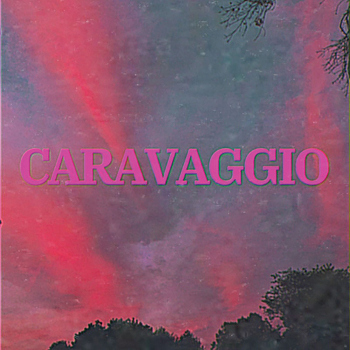 “I suppose the new direction is another pandemic story,” Nick Fisher offers as the impetus for the recent pivot of the band formerly known as Hex Girls. “I had begun writing lyrics to songs that seemed to lend themselves to a new project: The themes were darker, perhaps more complex. Personal grief, as well as the collective grief and isolation of the time, had informed that shift.”

The Fisher brothers, Nick and John, plus long-time collaborator Charlie Patterson, splintered into a new band: Mr. Softheart. At first glance, it might seem unnecessary to have rebooted the band with a new identity, but the double single of “Caravaggio” and “Flower of Tomorrow” shows a striking new territory for the trio.

Nowhere is this more apparent than in the vocals. Where Hex Girls style was a more fidgety and sneering bratty protest, Mr. Softheart tenders a more considered approach — introspective and moody, with pacing that develops with the music.
“Caravaggio” is a bouncing electropop work and the more pop-leaning track of the two new songs, falling somewhere between the post-punk of the New Romantics like Talk Talk and the cinematic goth of Nick Cave. The chiming synth lead and bouncing bass ride over a stomp-and-clap “Train in Vain” backbeat.

The title refers to the baroque 17th century Italian painter notable for his moody, sometimes violent paintings featuring stark lighting (the technique is called “tenebrism”). This is what Nick Fisher is calling into focus with references to light and shadow in the lyrics: “One of many names / One of many things / Casting shadows / I know / I know, I know / Caravaggio” as well as references to light rays and sunlight. The deep vocals never quite fall in the pocket but rather slide around with no concern about the beat, capturing perfectly a disconnected outsider perspective.

“Flower of Tomorrow” does not continue this style, choosing to present a more harrowing and noisy, droning track with no percussion that leans industrial. It’s reminiscent of the atmospheric work of Peter Gabriel for the 1988 film The Last Temptation of Christ (available in album form titled Passion). When the song folds the wordless cries of Penny Peach (credited as Elly Hoffmaier) at the 2:40 mark, it calls to mind Clare Torry on Pink Floyd’s “Great Gig in the Sky.” The whole song switches mood brilliantly from angry, distant, drunken grieving to sad and resolute. Not hope so much as an end of grief.

This double single of “Caravaggio” and “Flower of Tomorrow” is an impressive calling card for Mr. Softheart. The members of the band have been building on their skills as songwriters and performers since the early days of Hex Girls, and Mr. Softheart is the next stylistic step on that journey.

This article was originally published in Little Village’s June 2022 issue.