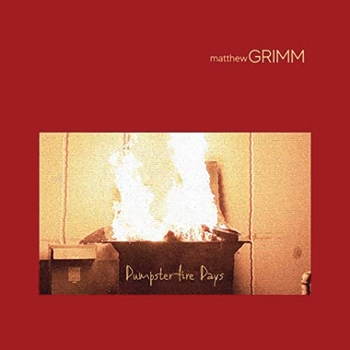 I don’t know about you, but I’ve been holding a lot inside the last several months. I spent most of June crying every day, but I can’t remember the last time I cried since. I’ve been angry and numb and unwilling to hope. Unwilling to feel.

Dumpster-Fire Days, the new album from former Iowa Citian (now Madison, Wisconsin-based) Matthew Grimm, cracked something open in me. From the opening track, I was bawling and laughing and reeling from the incredible relief of feeling heard.

Grimm has written a wry, funny, poetic, inspiring, antifascist protest album for 2020 and beyond. He’s turned his trademark incisiveness on the people and the times around us, and he pulls no punches in the truth he spits. His language is unfiltered (NSFW, much of it) and spun brilliantly, like someone wove Arlo Guthrie and Fiona Apple into the same intricate tapestry.

He dropped the closer, “Whirlwind,” just before the 2018 midterm election (along with a “get out the vote” vid), and its hopeful call to action feels almost naïve two years later. But the rest of the album (mixed and mastered by Iowa City’s John Svec) steps to it — scrappier, more cynical and desperate, but with a clear goal of wresting that optimism back.

Track three, “Aspire,” is a gorgeous folk rambler that turns hope on its head, with deconstructed clichés and hilarious twists that end up comforting in their reliance on realism. “If you’re gonna light a candle instead of cursing darkness maybe go ahead and burn some stuff down,” he sings, and closes the chorus with “we’ll talk in the morning,” a gesture of solidarity that makes you feel like you can accomplish anything.

But it’s track four that grabs you by the throat and pulls you out of your chair to shake your fist in the air and become a better person. “Be Saffiyah Khan” is a tribute to the star of a viral photo, a young British activist who stared down a leader of the English Defence League. The song, in all its bouncy, cowpunk glory, is the best kind of inspirational rallying cry. The chorus calls us, among other things, to “be what bad men fear” — I can’t imagine a better exhortation.

“Be true, be brash, be a mensch, be antifash / Be heard, be undaunted, be what bad men fear, be Saffiyah Khan.”

This record is beautiful. “Stay the Fuck Home, Becky” skewers anti-maskers; “Nazis Agree With You” erases distinctions between those who claim the term and those who simply embody it; and the powerful “March,” with its fantastic harmonies, gives us “O brothers and sisters, it falls to us to right their wrongs / And we’re not here to ask.”

If you feel crazy, or alone, or unheard, or gaslit, or just despondent: listen to Dumpster-Fire Days. It’s the best self-care you’ll give yourself all year. And for the love of all the gods, listen to it before you vote.

This article was originally published in Little Village issue 287.