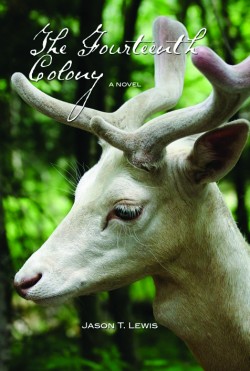 A common problem fiction writers have with musician characters is that if the author isn’t a skilled songwriter, then the character is much less believable. Never mind the fact that we never really know what the character’s songs would sound like, either. Iowa City author and musician Jason T. Lewis came up with a solution to this in his debut novel The Fourteenth Colony.
The book is a “you can never go home again”-themed story of a washed-up musician named John Martin who returns to his childhood hometown in an attempt to reconnect and possibly gain some bearings. In his van are his worldly possessions—a guitar and the tapes of an unreleased album.

The Fourteenth Colony is subtitled “a novel with music” because Lewis—who also performs as Sad Iron Music—went into the studio following the writing of the novel to record the songs that John Martin wrote as a companion work. Conveniently, John Martin’s particular genre of music is edgy guitar-soaked barstool Americana of the kind Sad Iron Music is known for. The songs reflect the need for escape that John Martin was feeling. When he sings “‘where you been, what you doin’ here again’, all these questions, no answers” in “Take This Song” it serves as the theme for the book, as Martin makes his way through town encountering people and places from his past. Lewis uses flashbacks to effectively develop concurrent past and future storylines. As he comes to terms with being in the town he left, we are shown also the events leading up to his original departure.

I found The Fourteenth Colony to be a good read. I identified with the challenge of coming home after an absence, and I found a parallel in my life to his small town experiences. Listening to the album while reading the novel enhanced the experience of both, and I hope that Jason T. Lewis continues this “novel with music” approach to his art.