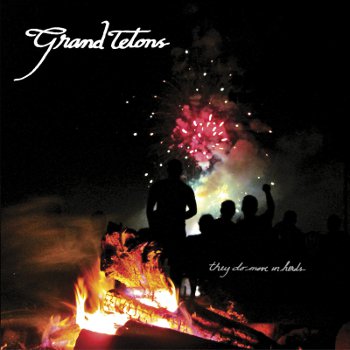 The debut album, They Do Move in Herds, from Grand Tetons is a quintessential 20-something’s album. The quartet has composed a paean to the lost years between college graduation and the “real world.” It’s clear from the opening organ strains of “Honey Don’t Know”—the aural equivalent of the sun cutting through the blinds and peeling open the lids glued to your eyes by a whiskey-soaked sleep—that Grand Tetons are sucking down experiences like well whiskeys and $2 tall boys. There isn’t a whole lot of restraint: too much to drink, too quiet, too loud, too many instruments; there’s a lot of life, and energy and the alt-country group wants you to feel it as intensely as they do.

Maybe because I’m only a handful of steady paychecks removed from these very excesses, but more often than not, these extreme swings work. The pell-mell ho-down on “Ton of Feathers,” even with the machine gun fiddle of Elle Black, still hits a sweet spot. Tetons follow it up with the shuffling revelries of “Because I Bloody Well Stammer.” Like a perfect beer-back, this track adds a pinch of balance while still ultimately compounding the bleary, drunken sway of the album.

All the inebriated grandeur and hungover reflection blends seamlessly on album standout “Monsoon.” From Greg Markus’ understated but engaging percussion to Black’s strongest fiddle arrangement on Herds, “Monsoon” is Grand Tetons’ perfect storm. Brian Johannesen’s gruff delivery gives his opaque lyrics an emotional specificity and gravity without getting too treacly. The instrumental refrain, where the quartet makes such a glorious, monsoon-mimicking racket, is the perfect emotional balance to the almost palpable pain in Johannesen’s verses.

“Monsoon” alone makes Herds one of the best Iowa City releases of 2011. It’s an accomplished debut, full of roughly polished alt-country tunes that will sound nice blaring out of the Mill’s jukebox.

John Schlotfelt does all his googling on Altavista.