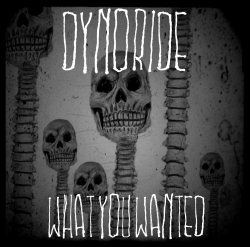 Dynoride is a Quad Cities band that was started in 2008 by a pair of old high school friends with the intent of producing—according to their press release—“quirky acoustic songs.” They quickly evolved to their self-described “hard rock riffs, punk energy and pop sensibility.” On their debut album What You Wanted,  what I hear is little bits of every 90’s Grunge band I still hold dear to my heart.

I’ll admit that in recent years I strayed from the path of metal, punk and whatever high energy pop there is for more peaceful Americana pastures. I blame Billie Joe Armstrong and Emo/Screamo for both diluting and removing the dark soul of this segment of rock. But, when I listen to What You Wanted my blood pressure increases, my knuckles whiten and my head starts bobbing to the sludgy chugging rhythm of tracks like “Mostly Dead” which to me is the intersection of Touch and Go bands like Shellac and Jesus Lizard and Northwest Grunge like Mudhoney and Nirvana.

It’s likely due to the fact that they lost all of the original recordings and was forced to recreate What You Wanted that contributes to the delicious Steve Albini-esque claustrophobic compression and palpable sense of urgency—as if they were reaching frantically for the quickly dissolving memories of the songs.

At the risk of sounding corny, What You Wanted was in fact what I wanted. Now, where the hell did I put my House of Large Sizes LPs…