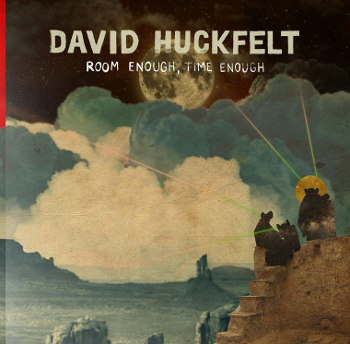 David Huckfelt’s 2021 Room Enough, Time Enough gets its title from the name the Navajo used to describe their ancestral homeland, near where Huckfelt recorded the album in Tucson, Arizona. Its rocky landscape influenced the Western themes of the record. Being in Tucson allowed Huckfelt to take a more communal approach to recording the album, which also gave him an opportunity to draw inspiration, collaborate and elevate Native American voices.

In a press release Huckfelt credits Johnny Cash’s controversial 1964 concept album Bitter Tears: Ballads of the American Indian as inspiration for him, and that album’s approach to historical storytelling looms large. Cash faced harsh criticism and ultimately censorship by the very radio stations who built his career. He wouldn’t receive the recognition he deserved for *Bitter Tears* until many years later.

A 21st century America isn’t much more enlightened, and the use of songwriters and performers to raise awareness for issues like water rights and discrimination makes Huckfelt’s album daring and a little edgy—not what we expect from his typical atmospheric, peaceful folk.

A great example of this blending is “The Book of Life,” a circular mantra written by Native American artist and songwriter Keith Secola, who is also on the album. The song is verse-by-verse prose; a list of questions interpolated with faith and hope.

Everybody worries / Why do we promise? / What is existence? / Why does it matter? / Who should I stand by? / Seeds of the future / Rise of humanity / Everything is sacred

The additional singing by Quiltman adds a lifting counterpoint to the weeping pedal steel and Huckfelt’s unadorned vocal.

There are many shining moments on Room Enough, Time Enough, and some of these are a result of his friends who joined him on the album. One particularly affecting performance is the duet with Greg Brown on the classic Red Hayes song “Satisfied Mind.” The juxtaposition of Huckfelt and Brown trading verses is like one man singing at two different stages of life. When they both sing the final verse wrapped in lush pedal steel guitar, it brings chills. “When my life is ended, and my time has run out / My friends and my loved ones I’ll leave there’s no doubt / But one thing’s for certain when it comes my time / I’ll leave this old world with a satisfied mind.”

Tucson luminaries (and founding members of Giant Sand) Howe Gelb and Billy Sedlmayr bring their southwestern influence to Huckfelt’s retooling of the dusty cowboy standard “Bury Me Not,” which Huckfelt describes in an email: “We turned the narrative of westward expansion on its head, retold here as a warning to honor Native lands and respect the Earth.” The addition of Calexico sideman Jon Villa on mariachi-style trumpet solo locks in a spaghetti western flavor.

As much as a reunion of Huckfelt’s band the Pines would be welcomed, his solo albums have documented the path of a songwriter and musician coming into his own. With the history of his years in the Pines in his rearview (for now, anyway), the road ahead is one paved in the folk tradition of collaboration and activism. Huckfelt says in the same email that Manifest Destiny has left our spirits and the planet sick and in great need of healing. Clearly his music is the strong medicine we need.