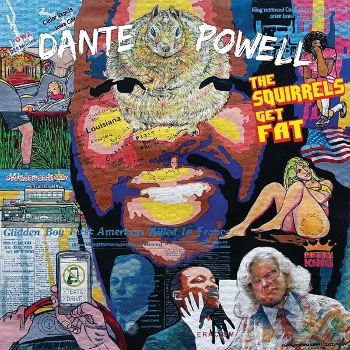 Comedian Dante Powell presents the Midwestern life in a hilarious and delightfully new way on his debut album The Squirrels Get Fat. Powell has lived in Iowa since 2012, after moving from Louisiana for a relationship that didn’t last long once he arrived in the Hawkeye State. Much of The Squirrels Get Fat is about the cultural learning curve that comes with his newfound home. The album has received a warm reaction by comedy fans, even hitting number one on the iTunes and Amazon comedy charts.

Powell creates an album that speaks to an often overlooked aspect in much of the entertainment industry: the weirdness of Midwestern life. Powell’s album spotlights the bizarre backstory of Des Moines’ Merle Hay Mall; his newly discovered knowledge about Iowa corn; and his perspective-altering experience with an overweight tree squirrel.

“I moved to Iowa six years ago for a girl I was madly in love with, and she dumped me as soon as I got here,” Powell riffs. “But I don’t give a fuck at all, because I never connected with her the way I connected with that fat-ass squirrel.”

Powell takes the audience through the struggles of his new home, his journey to self-betterment and what he does when he gets homesick for Louisiana.

Powell speaks on his journey moving to Iowa as an African-American Southerner and the shock it caused not just himself but his family. Jokes center around the bizarreness of a voicemail left by Powell’s father about Iowa Rep. Steve King in a hilarious example of Powell’s observational style. Another great bit from this album is Powell’s first experience with seasons.

“We don’t have seasons in Louisiana, sir,” Powell says. “We have humidity and hurricanes, and guess what? During hurricanes it just humid as shit so bam, back to one.”

The album, recorded during the 2019 Floodwater Comedy Festival in Iowa City, also covers examples of fast food corporations’ pettiness, sex robots and an imagined Martin Luther King Jr. walking into a Walmart. Powell offers so many sides of himself and his humor that there is something for everyone in the 49-minute record.

Powell has a warmth in his comedy, so much that it feels like you’re being told these jokes in a small group at a party. His humor is goofy, intimate and often absurd. Powell’s comedic style will speak to Iowa natives and non-natives alike. He finds humor in parts of life that much of Iowa’s population overlooks. I saw Powell perform earlier this year, and now, after hearing his first full-length comedy album, it’s safe to say that I am excited to see whatever else is in store for the Des Moines comic.