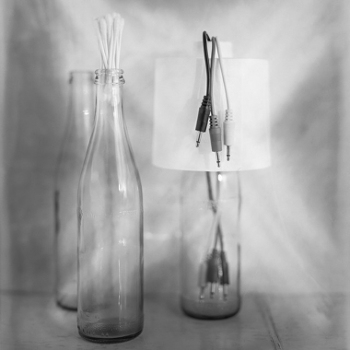 When Iowa City-based multimedia artist Barry Phipps posted to Facebook that he had just released a new album, I headed to my favorite streaming service right away. I am an admirer of Phipps’ book of photography, Between Gravity and What Cheer: Iowa Photographs, and aware of his history as a musician, which included membership in the Coctails. So I was eager to hear what his latest artistic endeavor might sound like. I was delighted by what I discovered.

The album was not created via a traditional compositional process. Instead, this music is drawn from several hours of early recordings that were not necessarily intended for public consumption.
In his notes on the record, Phipps writes:

“The Exuberance Phase is a collection of music I made while learning how to use a modular synthesizer. I began buying modules one at a time until I learned how to use them. I recorded stuff as I went along. Over time, I become more confident and proficient. Later, I went through these early recordings and had no memory of how I made them. … It’s the only music I’ve ever made that I can listen to without hearing me in the music. These are my favorite selections from over three hours of recorded compositions.”

For me, this collection of music is of a piece with Phipps’ photographs in From Gravity to What Cheer. When I spoke with him about the photography collection, he noted the ways in which the photos he was shooting seemed to build on one another.

“A lot of the towns had this consistent architecture and history, and they also have the same state of decay … I found that the texture and the accumulation of layers of culture were consistent from town to town. It was like the discovery of different iterations of the same thing over and over. But as a photographer who has a background studying painting, my photography is really about color, line, texture and form … It was like I was going from town to town to find the palette I was working from to compose these images.”

The music on The Exuberance Phase could also, I think, be accurately described as “different iterations of the same thing over and over” and made up of variations in “color, line, texture and form.”

The record also lives up to its name. There is something energizing — exuberant — about these compositions. They reward close listening, but also serve as aural support when you need to concentrate. The album serves, for example, as an excellent soundtrack for writing a review about itself.

This article was originally published in Little Village issue 281.