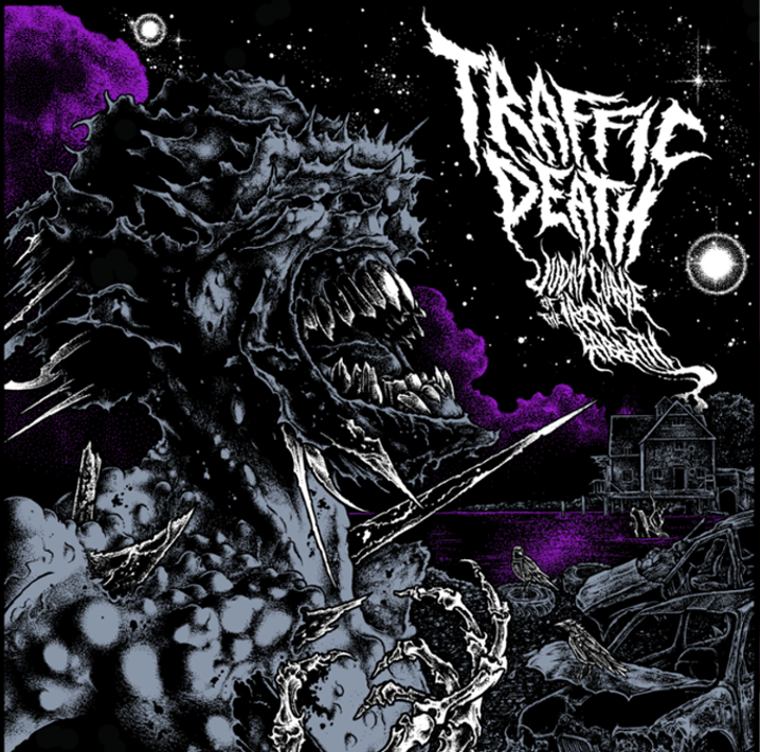 Look, it’s no surprise to anybody that I nearly broke the internet trying to get my hands on the new Traffic Death album (Ed. note: The album is available for preorder on the Bandcamp page for Sump Pump Records. Once physical copies are available, the band will have them at shows). I’m not going to pretend that I’m anything other than a fan. I’m also not going to pretend that Judas Curse of the Iron Sabbath is anything less than pure fire. It starts out good, and it just keeps getting better and better over the course of 23 tracks in just under 28 minutes.

Of course, several of those tracks are tiny snippets of sounds, the shortest only eight seconds.

This is heavy-hitting thrash at its best, coming hard and fast right out the gate with “The Fury” featuring killer speed vocals and a truly delightful guitar solo. Track two, “Too Late, Fuck You,” is exactly what you think it would be: a cathartic, rage-filled, drum-fueled rush with copious growled “fuck you”s that make you want to crank the volume and scream along. “Why do you drive like you’re going somewhere / When no one wants you to be anywhere?” the track asks.

Track three, “Crushed By Corpses,” the album’s second-longest at 3:09, closes out the opening tracks that could easily be their own release. It’s still quick, but it threatens to drift into a doom-y pulsing, a tease that’s repeated multiple times over the course of the record, notably again in the midst of the exquisite track six, “Subconscious Grief,” ushering in a noodly guitar like a clamp on a gushing artery.

Traffic Death plays with the same patient pulsing on the paired tracks five and eight, “The Horror Of Space …” and “… The Terror Of Time.” Drummer Brian Greenfield’s work on this album is incredibly varied and versatile. I hate singling anyone out in this tight, skilled ensemble, but damn it’s good.

Scattered throughout the album, per the band’s trademark style, are quotes from horror and sci-fi flicks, from the classic (Christine, RoboCop, Highlander) to the obscure (1989 college slasher flick Rush Week). They add that extra touch of the surreal, inform the lyrics on many of the tracks (like the line, “When the head is severed from the body, it actually does stay alive,” from “Subconscious Grief,” which riffs off the Highlander quote in track four, “The Wolf Doth Howl”) and make the whole thing feel like a string of all-nighters, survived through sheer willpower and late-night creep shows.

Album closer “Blast Overpressure” is something else entirely. It’s an instrumental coda with spacey contortions contrasted with simple piano that echoes in your mind after the last note fades. It follows the album’s longest offering, track 22, “No Recovery,” an intense, relentless number that includes lines like, “Trying to decide if I’m already dead.” “Blast Overpressure” is a weird respite that feels out of place, but necessary — one minute, 24 seconds spent staring at the embers after the fire goes out.

It’s a fitting end to an album dedicated to the memory of Des Moines musician Rob Ogg, who passed away in July of last year.

What is your role in the band, both musically and practically?

I am the vocalist; I wrote almost all the lyrics. Andrew [Smeltzer] has written two songs lyrically and Brian [Greenfield] has done one, but otherwise I have handled those duties while those guys write all of the actual tunes. I also book a good deal of the shows, make fliers, handle art concepts and screen print all the shirts, patches and other goods of that nature.

What’s your musical journey/history prior to Traffic Death?

I was in a band called Black Market Fetus for a good while 1998-2011; we did some national tours and even a European tour in 2006 and released many split 7”s, an LP and a couple split LPs. Also spent four years singing in a pre-existing band called Catheter, but I always felt like a hired gun so after a Euro tour we did, I left the band to take a break. Traffic Death was my return to playing in a band after a couple years of feeling like there was something missing in my life.

What’s been the trickiest COVID-19 reality to navigate as a band?

Shows. We actually didn’t even practice for many months, I’d say eight or nine. When COVID first hit, we had just played a couple shows and had a few more runs scheduled for that spring/early summer, as well as the recording session that became the Judas Curse of the Iron Sabbath LP — but we had to cancel it until we felt it was safe for us to record. Recording is a group experience, and we all wanted to be there for it. Plus in the end I feel like we were able to add some elements and songs because of the extra time; there was no real reason to release an album during COVID, because if you aren’t playing out on it I’m not sure what the point of releasing an album is.

What’s kept you going, despite the challenges of the past year? What other crap have you faced down?

We love to play, hang out and make something out of nothing. There is an awful lot of nothing going on out there, but there is also cool shit too. Mostly I love digging into old movies and music; those have both kept me going. Luckily, I had already moved my work to my house and started screen printing there, so I wasn’t affected too much by the shutdowns. But I definitely missed seeing people and getting out of the house. I have a few kids, so keeping them busy and trying to explain what the hell was going on was probably the hardest thing.

What’s your vision/dream for your future as a band?

I would love to do a full tour of Europe, as well as Japan, Australia and some places I’ve never had a chance to go. It would be cool to get to the places in the States we have yet to hit as well. I guess we will just have to see what happens with this new Delta variant and all the other stuff that happens in life, but I know we are ready and willing to get out and rip it up.