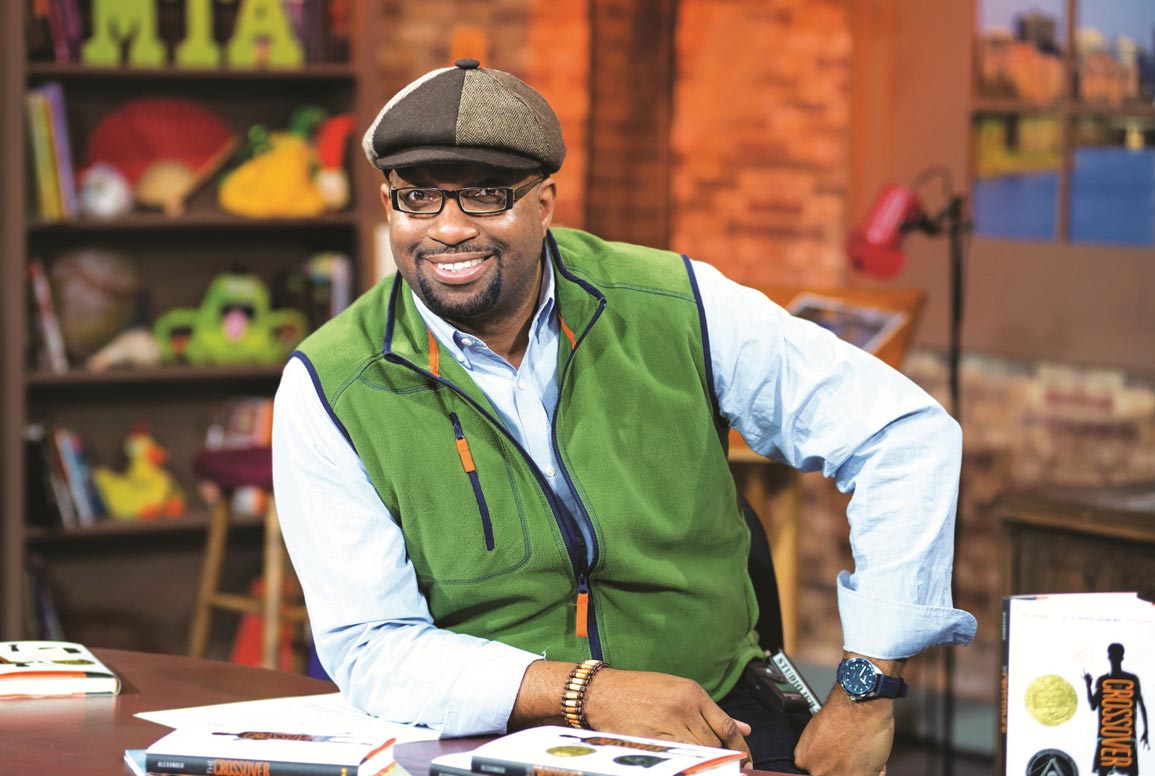 When he’s excited about a subject, Kwame Alexander speaks in a rapid-fire flow, an improvised musical line that takes a theme and mines it for meaning and possibility.

Take, for example, his answer to a question about cultural references — to jazz, hip-hop, books and more — in his novels-in-verse The Crossover and Booked.

“I’m a big fan of exploring what’s going on in the world and our place in it,” he says. And then he fires off a list as I scurry to keep my pen flying across the page of my notebook: books, music, police brutality (I didn’t see that one coming), first love, how to imagine a better world — probably more that I didn’t catch.

“To the degree I can spread my passion and love for humanity, I’m going to do it,” he finished.

Alexander is one of three authors participating in the tenth edition of Out Loud! The Metro Library Network Author Series, a collaboration between the Cedar Rapids, Marion and Hiawatha Public Libraries. His presentation is set for Friday, June 16 at 7 p.m. at the Hotel at Kirkwood Center in Cedar Rapids. He will be preceded on June 9 by crime fiction novelist Anne Perry; novelist Debbie Macomber follows on June 23.

Alexander, a poet, novelist and essayist, is best known for his 2014 YA novel The Crossover, which won the Newbery Medal and was selected as an Honor book for the Coretta Scott King Award. The book is narrated by Josh Bell, a junior high basketball star with a poet’s heart. The novel is told entirely in verse: some free, some structured and some pouring off the page with the insistent rhythm of rap.

There’s a stream of jazz flowing underneath the tale. Josh’s nickname, Filthy McMaster, is drawn from a Horace Silver number of that name. Alexander was awash in jazz while writing The Crossover.

“I’m listening to jazz the entire time,” he says of writing the novel. “I’m sitting in a Panera with my headphones on listening to the Miles Davis or the Coltrane channel on Pandora. I’m just immersed in jazz. The music becomes the inspiration for the poetry in the novel, and the poems, at least some of them, become musical.” He cites Langston Hughes as an inspiration for the poems that have a jazz or blues feel to them.

Alexander worked on The Crossover for five years. The book started as a collection of linked poems. That’s different from a novel-in-verse, he says. “I needed to write a novel that happened to be told in verse. The biggest thing is the story. You’re thinking like a novelist, which I had never done before.”

Crafting a plot in verse is challenging, but Alexander believes the poems offer the reader room to enter the story. “That’s why all the white space is there,” he says. “So that people can be intuitive about what’s not there.”

Certain forbidden objects serve an almost talismanic purpose for the characters in The Crossover and Booked, Alexander’s 2016 novel with soccer at its center. Turns out, Alexander is something of scavenger himself.

“When I was young I loved to meddle,” he says. He would search attics, under beds, in his grandfather’s closet. “I love finding stuff and those things were magical to me. I don’t know what I thought they did but they were magical. It made me feel a certain way to have things no one else has.”

It was while he was rummaging in the attic that he stumbled upon his father’s collection of jazz records. He’d never listened to jazz, and he’d never heard his dad — a Baptist minister who listened to gospel music and was something of an authoritarian — listening to jazz, either. He took those records back to college where they provided a unique soundtrack in his room. “I would get dates, man,” he said with a laugh. But the music did more for him than that.

The relationships between teenagers and their parents figure prominently in Alexander’s work. That, of course, is in keeping with his larger theme of young people finding their way in the world. His forthcoming novel-in-verse, Solo (written with Mary Rand Hess), has its origins in his own efforts to understand himself and the world while in high school. Solo is about a musician, and rock and roll takes the place of jazz and hip hop. While writing, his headphones pulsed with Van Halen, Tears for Fears, Metallica, Prince and others.

“I always wanted to write about that, about the way rock and roll helped me understand the wonders of the world as a teenager.”

Alexander has been helping young people understand the wonders of the world since he applied to be a poet in the schools in 1991. “It sounds easy, but it was hard,” he says. But it was also important. “I came to realize that poetry could help transform students’ academic life, it could help transform their personal life and their life in general because it had transformed mine.”

He has been named the 2017 National Summer Reading Champion for the Collaborative Summer Library Program, a nonprofit consortium of states that collaborate to ensure libraries are able to provide high-quality summer reading programs at the lowest possible cost.

Alexander remembers well his childhood visits to the library in Brooklyn and to other libraries through the years. “I remember that feeling of wonder that I experienced whenever I was in a library,” he says.

“Libraries are these great equalizers for living and learning. Anyone can open up a world of possibilities by opening the pages of a book,” he says.

He jokes that he can’t reveal his plans for his event for the Out Loud! Author Series, but warms up to the topic in a hurry, the rhythm back in his delivery.

He plans to rally his audience around a love of reading.

Rob Cline is an arts professional and freelance writer. He lives in Cedar Rapids and covers the arts and culture scene there for Little Village. This article was originally published in Little Village issue 222.