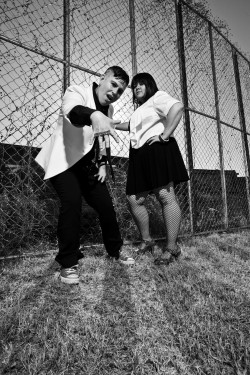 God-Des & She (“God-Des” as in “goddess”) combines the spirited rap lyrics of God-Des with the soulful vibrato of She to create a proud-to-be-me vibe of love and happiness.

She’s astounding vocals can reach the emotional heights of those of more established performers like Beyoncé and Adele, while God-Des’ rhymes make you think, “Well, somebody had to say it.” (Think: how to make her raspberry swirl.) Their claims-to-fame include performing at SXSW in 2011 and 2012, being featured on the Season 3 finale of The L Word and their song “Love You Better” holding a record number of requests on the Logo channel.

But they’re not just in it for the music. They wrote their song “Never Give Up” as an anthem for LGBTQ youth who struggle with being bullied. In an interview with AfterEllen.com, God-des said they want to “…bring awareness [to gay issues] and start a curriculum in all public schools throughout the United States…” They want their efforts to encourage people to hold school officials accountable for the devastating cases of bullying their fans write to them about.

Warming up the crowd that night will be Iowa’s own I.C. Kings/, a drag king troupe that regularly graces the Studio 13 stage, but rarely reigns over Gabe’s stage. Expect them to perform in their full majestical glory.