Even though Iowa City has always been a transient town, especially when it comes to music, there has been an overwhelming number of local musicians leaving town lately. It’s an unfortunate epidemic; Unfortunate in a selfish way, since many of these musicians will find greener pastures in larger cities or larger music scenes. But they also leave behind a creative hole in our pool of musicians.

One of these recent ex-pats is Mickey Shaw. Shaw was in a few bands while he did his time in town, most notably as the unflappable singer for Solid Attitude. But right before he left for Minneapolis, he, Matt Fenner and Brad Highnam started Xerox.

You couldn’t pick a more perfect trio of dudes who soak up rock and roll and bleed it back out for a band. Fenner (Solid Attitude, Dead In Bed) plays guitar and sings. Highnam (Nerv, Los Voltage, Old Scratch Revival Singers) plays drums and Shaw plays bass and sings as well in what could be Iowa City’s first punk supergroup.

Although the trio hasn’t called the band quits and plans on travelling to rehearse, record and plan shows, the space between them could certainly complicate things. They managed a handful of shows before Shaw moved and really blew away folks who had the chance to see them. They have a distinct punk vibe in a multi-faceted, genre-crossing Minutemen sort of way. They made a conscious effort to concentrate on multiple vocals, as Shaw and Fenner trade lines back in forth during their songs. Their rock and roll side is a mixed bag of eclectic influences. But their personalities are so strong that it comes through in the music and kinda melts away any obvious imprints.

We had a chance to listen to some of Xerox’s pre-mixed recordings. They recently finished them Flat Black Studios with Luke Tweedy and answered a few questions for Little Village afterward. 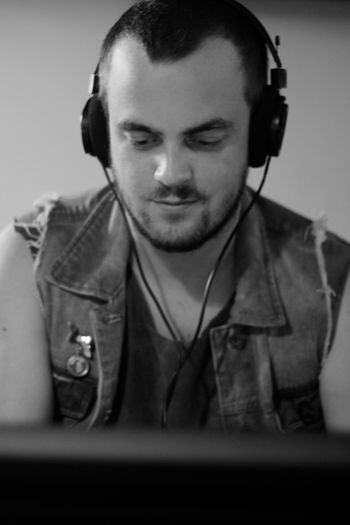 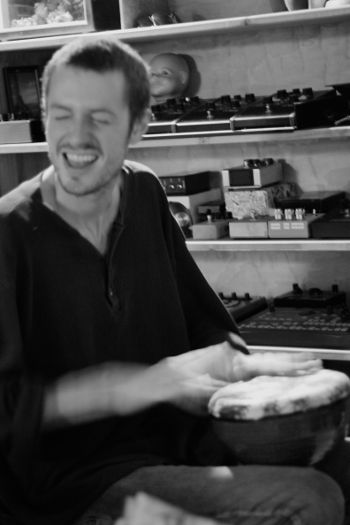 From left to right: Mickey Shaw and Brad Highnam of Xerox — photos by Luke Tweedy

Little Village: How did Xerox get started? What was it that brought ya’ll together to make this band?

Xerox: Xerox started as Dead In Bed 2, but failed. Out of that confusion came the batch of songs that make up the record.

LV: What records are you guys listening to right now? I know Mickey was in the Record Collector constantly buying stuff. Are those sounds bleeding into the direction ya’ll are going?

X: Lee Hazelwood, The Homosexuals, Grateful Dead bootlegs, Discharge reissues, The Fall’s Grotesque (After the Gramme) [Their 3rd excellent, raw jammer of an album. -Ed.], Miles Davis Live Evil, Neil Young Zuma. We try to sound like all that.

LV: Have you guys heard the Black Randy and the Metrosquad album Pass The Dust I Think I’m Bowie? You should check that out immediately. Ya’ll will love it. What did you record at Luke’s and how was the experience? What do you like about being at Flat Black Studios?

X: All the songs were collectively written and pretty much wrote themselves in the span of a couple weeks. We did six songs at Luke’s and it took a day. Recording with Luke is always a pleasure. We went into the studio with pretty much nothing, so all the sounds were created with the help of his brain and equipment.

LV: What are you going to do with the recordings? What I heard was great. Please, do a friggin’ 7″ record.

X: We’ll do a 7″ if you put it out. Spengler Records. Otherwise expect a crappy tape sometime soon.

LV: Could the band continue without Mickey? If not, what will happen? On the other hand, however, sometimes the best relationships are the really short ones. Where you just meet this girl, spend the evening with her or the weekend in New Orleans or something, and then at the end, just part ways and never see each other again and it was the best relationship you’ve ever had? Does that describe Xerox or am I totally wrong.

X: Mickey moving to Minneapolis doesn’t mean the end of it. It’s a brand new project still. We were trying to play as much as we could before he left. We’ll write more and play more shows. It probably just means we’ll play Minneapolis more and Iowa City less. A better metaphor might be where you meet a girl, fall for her, but she’s in love with someone else. So, you just get action on the side until one day she figures out you’ve been there for her all along. Or maybe she’s in love with you and can’t see it yet cause you’re too young and free spirited. Actually you both realize it but you’re in denial cause ya love yourselves too much. There’s no such thing as love. Stay punk die free.