These are the remarks Donald Trump made a little over a week ago after Iowan Sikh protester (and former Little Village editor) Arish Singh was thrown out of his rally in Muscatine, Iowa.

Today those words have been turned around and fashioned into a pool of limitless epicness in which Trump is helplessly flailing and will inevitably drown. Truly amazing.

Let’s break it down: The ambiguity of Trump’s words — was he trying to denigrate Singh’s turban or just trying to work in a plug for one of the $25 dollar hats that he’s invested more than $400,000 of his own money into — quickly seized attention of the public and the media alike.

The Washington Post described the ambiguous statement as a “barbed quip” while hundreds of people who reached out to Singh used descriptions like “bizarre,” “super weird,” “head-scratching,” “like someone with a head injury struggling to regain focus,”
and “so devoid of real meaning as to be only worthy of an eyeroll.”

Concerned any interviews he did would be turned into some innocous navel-gazing clickbait journalism about the semantics of headwear, (“Could a turban be a hat?” in the fashion of “Could a hotdog be sandwich?), Singh tried to only address the issues that led to his protest: Trump’s support from right-wing extremists and the anti-muslim bigotry and general xenophobia that his campaign has perpetuated.

For the most part, Singh stayed out of the hatroversy.

Until now, that is.

With Singh’s comments on the record in several news sources and Trump’s failure to win the Iowa Caucus, Singh feels comfortable responding to Trump’s barely coherent statement, and showing everywhere it goes wrong.

With just three photos, Singh shuts down Trump’s ambiguity from both ends, and then ties those ends together into a neat, tidy bow of unlimited victorious awesomeness. Stunning.

Photo 1: Singh fires back at interpretation one: Trump was trying to denigrate his turban by calling it a hat. 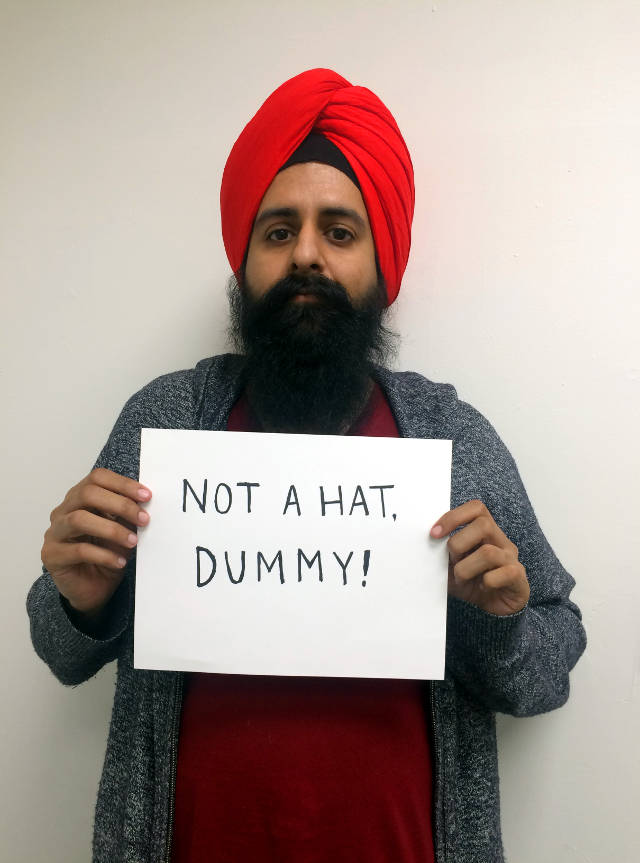 With just a piece of paper with words on it, Singh completely destroys Trump’s nonsense by making it 100% clear a turban isn’t a hat. Singh rounds out the destruction by taking a swipe of his own: He calls Trump a “dummy,” thereby implying Trump’s confusion over turbans is just one more failure in his long struggle with education, a topic he’s enormously sensitive about. Ouch! That’s one burn that will never stop stinging. Hope you don’t go broke buying tissues, Donald!

Photo 2: Singh takes aim at interpretation two: Trump was talking about one of his overpriced campaign hats and claiming Singh will never wear one of those hats. 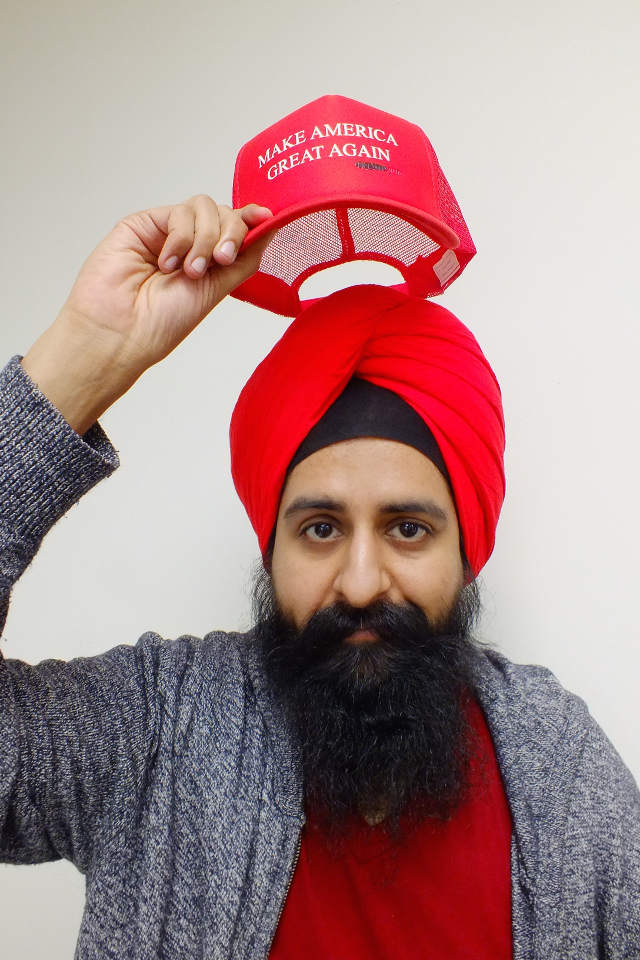 Completely shutting down Trump’s ideas, Singh shows he easily could wear a Trump hat — by wearing it on top of his turban. What!?!?

Has anything ever been this epic before? No. 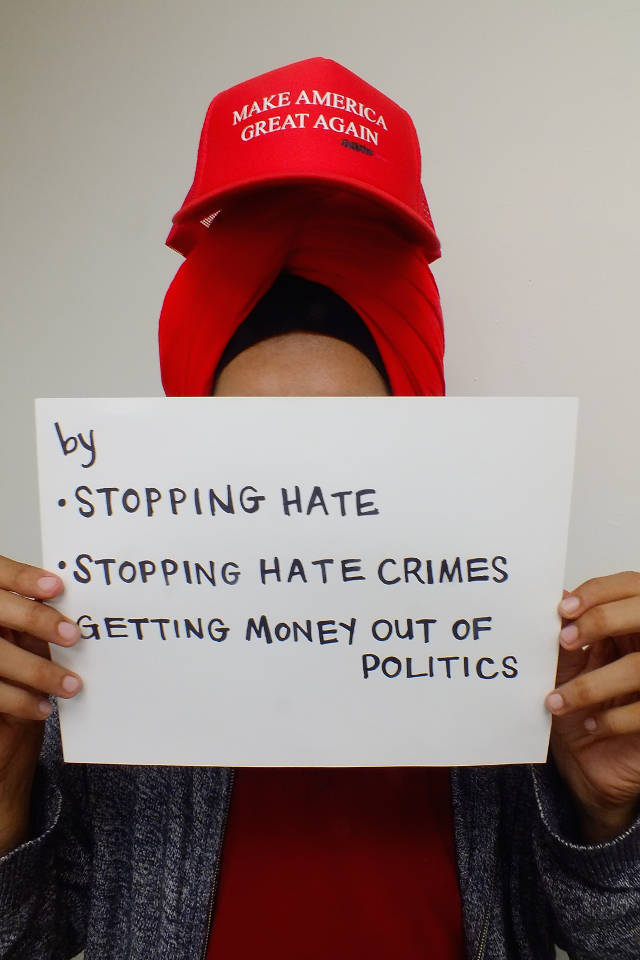 Singh shows that not only can he wear the hat, he can wear it on his terms with one easy trick: a prepositional phrase. With just another sheet of paper with words on it, Singh extends the “Make America Great Again” phrase on the hat to read “Make America Great Again By Stopping Hate, Stopping Hatecrimes, and Getting Money out of Politics,” expressing not only the points of his protest, but expanding it to support Muslim and Sikh unity against hate crimes, and then finally slamming the diseased political system of which he considers Trump to be merely the most disgusting symptom.

Singh expects that much of the media will squander the most epic win mankind has ever known in an insular debate about whether wearing something on top of something is truly wearing something. However, he is content with just totally destroying Donald Trump.

Singh will be taking his win from the internet to the road, touring around through the midwest, attending comedy shows and other events, to directly show people in person just how wrong Trump can be (because his false claim that thousands of American Muslims cheered on 911 hasn’t done the trick yet).

He’ll also be encouraging people to help stand up against hatecrimes against Sikhs and Muslims, to call out lies that equate Islam with radical religious terrorism and to oppose a political system that extremely privileges the wealthy, whether as candidates or as financial gatekeepers of who can run political campaigns.