The 2013 Iowa Arts Festival kicks off today in downtown Iowa City, and this year’s crop of music performances is no slouch.

Folk foursome Redbird is the result of Kris Delmhorst, Jeffrey Foucault, Peter Mulvey and David Goodrich getting together to play covers in their hotel rooms while touring Europe back in 2003. Onstage they like to keep things informal, which makes for improvisation-heavy sets that feel like loose musical conversations.

Richard Thompson is a legend in the music world. He has recorded with artists like Robert Plant, Elvis Costello and Bonnie Raitt. He was listed by Rolling Stone as one of the 20 greatest guitarists of all time, and in 2011 his live record Dream Attic was nominated for the Best Contemporary Folk Album Grammy Award. Thompson is by no means new to the world of folk music, but it seems as though his career is just now beginning to reach its peak.

This eclectic five-piece uses an accordion, washboard, banjo, ukulele and stand-up bass to take audiences back in time to the era of swing and parlor music. Their performances are known for getting crowds moving, so don’t forget to wear your dancing shoes to this one.

Iowa City folk band SlewGrass is set to play at 1:30 p.m. They build their unique-yet-genuine sound by coming together for frequent vocal harmonies that rise above tight rhythms created by banjo, viola and bass guitars.

The Beggarmen have been performing their Irish folk music around the region for over a decade now, and that experience really comes through during their live shows. They’ve also collaborated with the University of Iowa’s Symphony Band and provided musical accompaniment to several University of Iowa and Riverside Theatre productions.

Iowa City native Kelly Pardekooper’s music has been popping up all over the place lately. His songs have been featured on television shows like True Blood and Justified, and he’s been touring tirelessly, making appearances at the SXSW festival in Austin, TX as well as the Take Root Festival in Holland. Hearing his haunting vocals and clean guitar work come together to construct a sound that walks a line somewhere between alt-country and post-grunge, it’s easy to understand why his music has become so popular as of late.

Eilen Jewell is known for her stylistic range and often-melancholy vocal style. She has established a committed fan base through her ability to create songs that combine rockabilly with swing and classic country. Her refreshing, genre-bending music should fit perfectly into this year’s Arts Festival lineup.

The Old 97’s are best known for being pioneers of the alt-country sound, and rightfully so, but at times their sound borders on something closer to pop-punk. They’re an alt-country band to be sure, but their sound lacks much of the twang that has come to characterize the genre, and that’s not necessarily a bad thing. They’ve been playing together since the mid-90’s and have developed a dedicated following throughout the US.

Starting things off on Sunday is the UI Pan American Steel Drum Band. If you hear a rattling in your hangover-addled skull sometime shortly before 10:00 a.m., here’s your primary suspect. But in all seriousness, this group has recorded two albums thus far and come with a host of critical acclaim. Start off your Sunday with a bang!

Due in large part to her country upbringing, Rachel Marie’s style is wrapped with passion for American folk music. Marie has shared stage time with Douglas Kramer Nye, Eli Lauders and Haley Bonar just to name a few.

MovMnt is a contemporary hip hop dance company based out of Cedar Rapids founded in 2007 by Lovar Davis Kidd. This not-for-profit organization performs around the Cedar Rapids, Iowa City and Quad Cities area. They also provide dance education and performance opportunities for those looking to break into the world of dance.

A regular of the Iowa Arts Festival, the Iowa City Community Band consists of an intrepid group of local musicians whose passion for their craft is undeniable. This is a volunteer group that loves what they do, and their enthusiasm is almost infectious. Grab some lunch from Culinary Row, take a seat and relax to the sounds of our admirable community band. 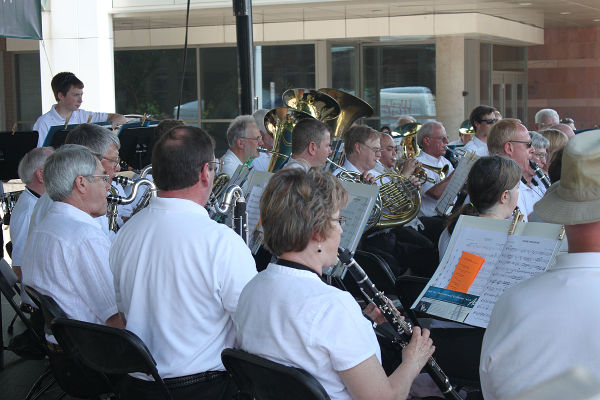 Starting at 2:00 p.m., Christy Brown-Kwaiser will take the stage to kick off a series of four sets by acoustic musicians from around the Iowa City area. Those looking to take in a half day on Sunday should start here.

William Danger Ford is an acoustic musician, lover of stringed instruments and an all-around excellent performer. His soft acoustic melodies are often punctuated by high energy, high BPM tracks that keep the listener on his or her toes.

After spending some time in Auckland, New Zealand, Jordan Sellergren returned to Iowa City and began producing music under the name Milk & Eggs. Since her return in 2010, she has released a full-length album titled Birdhouses in addition to her consistent live performances at both local and regional venues.

Those familiar with the local music scene know solo artist Sam Knutson well. Knutson is a staple in Iowa City (we have lots of those) with a knack for writing songs that are as catchy as they are thoughtful. Check out the main stage Sunday afternoon for a dose of his unique brand of acoustic Americana.