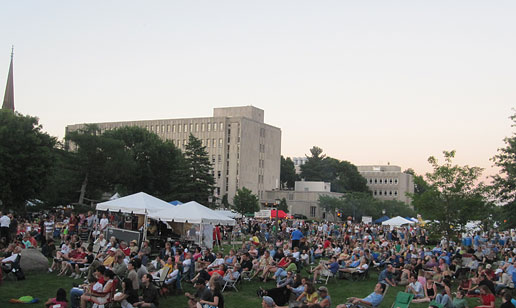 How about that jazz, hepcats? Hopefully you’ve made it downtown to get your fill of live music and vittles, but if you’ve been missing out, fret not! We’ve plenty of video highlights from Friday’s festivities to share, including clips of the U.S. Army blues–straight out of Washington D.C.–and the Bob Washut Dream Band.

Now, you may notice that the following videos are flanked on all sides by a thick black border. This is Little Village Magazine’s attempt to pay homage to the Avant-garde roots of American Jazz. It is most certainly not a one-time technical difficulty. No, everything went exactly as planned, my friends. Honest!

That said, lets watch some jazz. Below you’ll find the Bob Washut Dream Band, followed by Iowa City’s own Oatts Brothers. Last but not least, we have the U.S. Army Blues.

Be sure to check back all weekend for plenty more photos and video of the 2010 Iowa Jazz Festival. We’ll see you downtown.