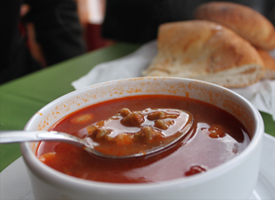 An estimated 400-600 individuals attended the event, paying $20 to be treated to live music and to sample the 42 different kinds of soup donated by local restaurants. The event affords local residents an opportunity to pitch in for the fight against domestic violence in Iowa.

“A lot of people think domestic violence in Iowa City isn’t a big deal, or they don’t really hear about it,” said DVIP Victim Advocate Nada Moustafa. Having spent some of her volunteer time working DVIP’s 24 hour phone hotline, Moustafa says the event, in part, reminds victims and advocates alike that such resources are always available.

Community support is a necessity if advocacy institutions such as DVIP are to remain economically viable. Existing as a non-profit organization, the Iowa City-based chapter of DVIP services Johnson, Iowa, Cedar and Washington counties alone, and funding is rarely a known quantity.

To put the issue into perspective, Loew points out that there are just over 20 domestic violence programs in the state of Iowa. In contrast, Iowa has over 200 animal shelters.

Keeping these domestic violence programs operational is an uphill battle. Although the Iowa City-based chapter of DVIP isn’t going anywhere, other programs across the state are closing their doors. The disappearance of these programs is not only affecting the victims’ ability to seek council, but also putting a greater burden on still-operational support centers by increasing their caseload.

In addition to offering victim counseling and support groups, DVIP maintains an Iowa City shelter of undisclosed location for those without the resources to flee an abusive situation. Victims may stay for up to 90 days, though most stay between 20-40 days. Typically housing over 40 individuals on any given night, the 24-hour shelter gives domestic violence victims some semblance of normal life.

“You do what you do at home,” Loew said. “People wake up in the morning, read the newspaper or get a coffee. Some people have jobs. Some people go to school.”

Funding and shelter aside, the Souper Bowl fundraiser also hopes to diminish the social stigma associated with domestic violence victims that Loew believes prevents some individuals from seeking help.

“Victim blaming is still a huge issue,” she said, noting those who recently sympathized with rapper Chris Brown after he assaulted his girlfriend, R&B singer Rihanna.

“What did she do? Why was he so mad?” Loew said, mimicking the sentiment of those who side with Brown. “There’s lots of questions, and it makes women feel like they did something wrong.” Some of the victims seeking support from DVIP are coming four or five years after the domestic violence took place, Loew says, thanks in-part to this perpetuated stigma.