Since mid-January, much of the east side of Iowa City has actively worked to save the life of Pearl, a black lab mix who has been on the loose amidst one of the snowiest, coldest winters in recent memory.

Pearl was a feral dog who was captured (with her litter of pups) and eventually adopted out to a local resident by a humane society some distance from here. Almost immediately on arrival in Iowa City, Pearl slipped her harness and has been on the run since, circumnavigating the east side. She is fast (a volunteer followed her in her car at 20 to 25 miles per hour), fearful of humans and has, as of this writing, been impossible to capture.

Whether we know it or not, Pearl has actually taught us much about the “heart of democracy,” a concept detailed in Parker Palmer’s important 2011 book called Healing the Heart of Democracy: The Courage to Create a Politics Worthy of the Human Spirit (Jossey-Bass). Parker Palmer’s wisdom has been an important touchstone for me during the recent fraught political years, and it is much on my mind as I prepare to teach a short online class based on his book through the Terramuse retreat center.

Palmer harks back to Alexis de Tocqueville’s idea of “habits of the heart,” in which heart “comes from the Latin cor,” which in its original meaning points to the core of the human self, that center-place where all of our ways of knowing converge: intellectual, emotional, sensory, intuitive, imaginative, experiential, relational and bodily, among others. The heart is where we integrate what we know in our minds with what we know in our bones, the place where our knowledge can become more fully human.

So what does this have to do with a runaway dog in Iowa City? The five “habits of the heart” that Palmer cites as necessary to heal our democracy are exactly what eastsiders have been practicing.

Palmer’s first “habit” is “an understanding that we are all in this together.” As Palmer says, “Despite our illusions of individualism and national superiority, we humans are a profoundly interconnected species — entwined with one another and with all forms of life.” My wife, Susan, founded and still co-manages the Iowa City Lost Pets Facebook page, and when she first posted a notice that Pearl was missing, this unfortunate dog struck the hearts of dozens, then hundreds, then thousands of people as the lost notice went viral on Facebook and other social media.

It wasn’t long before dozens of expressions of desire to help poured in. Being “all in this together” came not just in the form of hopes and prayers but also the impulse to fulfill the second habit of the heart, “a sense of personal voice and agency.” Dozens of people wanted to be actors, not just spectators, desiring to “know the satisfaction that comes from contributing to positive change.”

Pearl’s situation is tricky because she simply runs away at top speed at the sight of people. When it became clear more expert help was needed, the folks at Fur Fun Rescue of Lisbon, who have expertise in capturing dogs like Pearl, were brought into the fold. The most important actions individuals could take were reporting sightings to a central person and putting high-quality puppy chow out for the lost pup. It wasn’t long before many eastsiders were doing just those things (as well as some providing financial contributions). The ultimate plan has been to determine Pearl’s patterns of movement, then reduce her preferred eating stations to one, where a special electronic trap could be set. This was all complicated by the two weeks of the polar vortex, which made her situation even more dire yet made ample feeding stations necessary to keep her alive, delaying their reduction in number to narrow her movements. 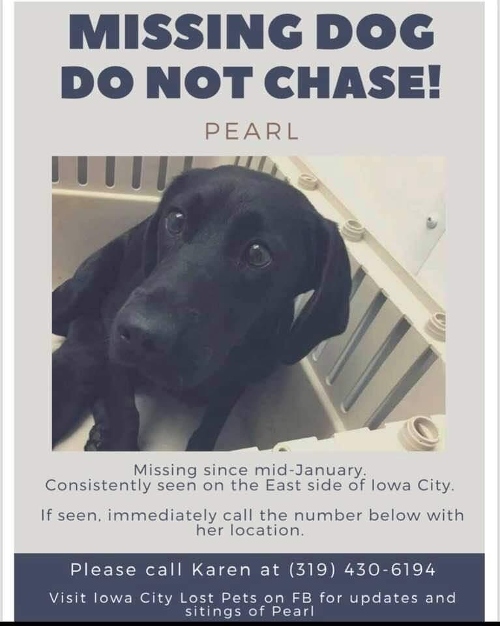 The complications of the rescue fit one of the most challenging of democracy’s five habits of the heart: “an ability to hold tension in life-giving ways.” With Pearl, our sympathy impelled our desire to rush out and try to corral this pup, especially as the frigid nights continued, but what needed to happen was the opposite — to keep our distance. Too much “help” and interference would undermine attempts to lure her to a specific location and would make her mistrust humans even more. Yet the contradiction between what we wanted to do and what we needed to do for Pearl couldn’t “shut us down and take us out of the action,” as Palmer says. If we all held that tension “to expand our hearts,” we could be of good service to the rescue effort.

One of the most important habits in Palmer’s scheme and one that applies so fully in the Pearl rescue effort is “an appreciation of the value of ‘otherness.’” While Palmer is talking about the human “other” in order to bridge cultural and political gaps, I extend the idea here to the nonhuman other. Unfortunately, many view the nonhuman — even the entire natural world — as “other,” to the detriment of both the planet and our social systems. Expanding our empathy to an animal in distress is one of the greatest demonstrations of valuing otherness. It is remarkable how so many have spontaneously become invested in this creature who wants nothing to do with us and who will never be part of our ongoing lives. As well, despite our strenuous efforts, the outcome is far from certain. We don’t know if Pearl will survive or if she will perhaps simply take off for parts unknown. That’s another kind of tension that we must hold in order to continue on.

The culmination of these habits of the heart is, of course, the fifth one: “a capacity to create community.” In drawing from the wisdom of de Tocqueville, Palmer emphasizes the importance of “the health of the local venues in which the heart gets formed or deformed: families, neighborhoods, classrooms, congregations, voluntary associations, workplaces and the various places of public life where ‘the company of strangers’ gathers.” Our current rescue effort for Pearl has instantaneously brought together a remarkable cooperative linkage between local strangers, neighborhoods and voluntary associations in a difficult but necessary public effort.

While we’re not trying to eliminate the massive cultural and political divides we see in our country today or address the national (even global) fallout of the U.S. Capitol insurrection, the Pearl rescue is invoking and employing all the habits of the heart that are at the core of democratic health and action, which themselves are always made up of small local actions as well as large comprehensive initiatives. Those habits have been taken up instantly and enthusiastically by many in our eastside Iowa City community, and if we can do this for Pearl, we can do it for the creation of a larger politics — and a culture and society — worthy of the human spirit.

Update: Shortly after this column was completed, Pearl was hit by a car and killed. Sadly, the collective effort has transformed into collective grief.

Thomas Dean is triple-checking that his dogs’ collars are tight and that his backyard is secure this winter. This article was originally published in Little Village issue 292.