How a divorce helped kick-start marriage equality in Iowa

The path to marriage equality in Iowa started with a divorce.

Kimberly Brown and Jennifer Perez traveled from their home in western Iowa to Vermont in 2002 to be joined in a civil union, a substitute for traditional civic marriages Vermont created for same-sex couples in 2000. But during the following year, Brown and Perez decided to go their separate ways. Like any couple in their situation, they hired attorneys.

Iowa passed a law against same-sex couples getting married in 1998, but nothing in that law dealt with the divorce of people married in other states. Neary approved Brown and Perez’s petition.

The Sioux City Journal printed a story on the divorce, but it wasn’t until the Des Moines Register ran a front-page story titled “Iowa Judge OKs Lesbian Divorce” on Dec. 2, 2003, that the case got much attention.

Conservative politicians and anti-LGBTQ groups across the state exploded in outrage. A same-sex divorce was an implicit recognition that same-sex unions were valid, they complained. Worse, they feared Neary’s decision might turn Iowa into a destination for same-sex couples wanting a divorce. Continue reading…

A conversation with Kate and Trish Varnum, 10 years after Varnum v. Brien

Cedar Rapids couple Kate and Trish Varnum celebrate their 18th, 15th and 10th anniversaries this year: they’ve been together since 2001, had a religious marriage ceremony in 2004 and were legally married in 2009, after a landmark Iowa Supreme Court case that bore their name.

Since the April 3, 2009 ruling in Varnum v. Brien, the case spearheaded by Lambda Legal that legalized same-sex marriage in the state of Iowa, the Varnums adopted their son, Alex, now 7 years old. Both mothers went back to school to earn their degrees, and are employed by Collins Aerospace in Cedar Rapids.

Little Village caught up with Kate and Trish on the eve of Varnum v. Brien’s own 10th anniversary. It was the Varnums’ first interview in years, and the couple discussed their relationship, how it feels to have a famous name and the issues on their minds now. They also shared a message for their fellow plaintiffs. Continue reading… 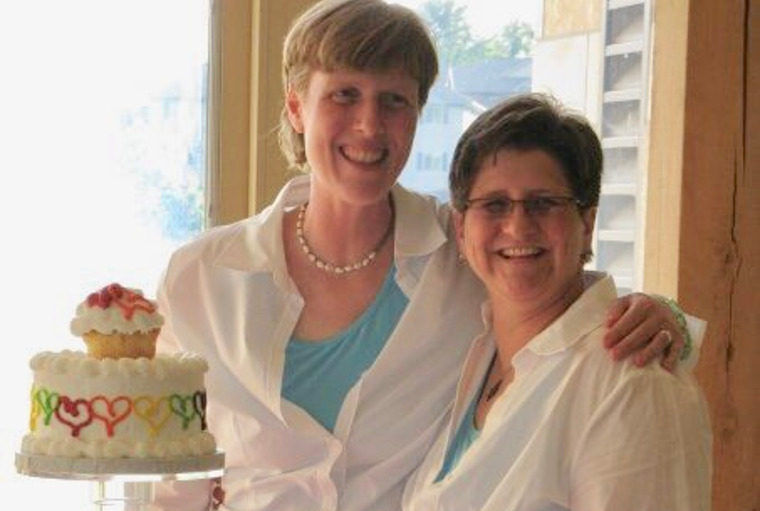 The day the Iowa Supreme Court announced they’d made a decision in Varnum v. Brien, the landmark case that would determine whether to legalize same-sex marriage in Iowa, Dawn and Jennifer BarbouRoskes’ two young daughters had covered their faces in temporary tattoos.

“Jen’s at work and I’m scrubbing their faces,” Dawn recalled. “Bre had fallen at school.”

“And had a massive lump on her forehead,” Jen said. (The women have a tendency to finish each other’s sentences.) “We were told all this national media is going to be there tomorrow. That’s exactly how our life goes.”

“And we didn’t have shoes for McKinley, so we had to get shoes for her,” Dawn added with a laugh. Finding humor in stressful situations, they said, is one of their talents as a couple.

After some face-washing, shopping and driving, the Iowa City family eventually found themselves at the Hotel Fort Des Moines. The next morning — April 3, 2009 — the BarbouRoskes gathered in a room with the other 11 plaintiffs in the Varnum suit. Someone took their cell phones. Their attorneys were upstairs, sifting through the ruling ahead of a press conference, at which the plaintiffs, in front of the world, would hear the justices’ decision.

“We had to prepare our kids that whole time,” Dawn said. Breeanna, 6 and a half years old, and McKinley, 11, were also plaintiffs in the case. Their moms told them, “We’re fighting for this. It’s the right thing. It may not happen, but that doesn’t mean we’re not a family still.”

“That’s a lot of pressure: to be sitting in a room knowing other people know what your life has in store for you, but you don’t know,” Dawn said. “In that moment you’re tossed out of a plane, and is the parachute going to open or not?” Continue reading…

‘It rocked my world’: Catching up with the Grays, one of the first lesbian couples married in Iowa

Decades before Lois and Karen Gray became one of the first same-sex couples in Iowa to legally marry, they were Iowa farm girls, courting each other on the campus of Grand View College (now University) in Des Moines.

In the mid-1980s, in fairly quick succession, the women became friends, then roommates, then girlfriends. This evolution was organic, they said, though neither was fully aware of their attraction to women until they met each other. Lois was from New Hampton, Karen from Lake City; both are from fairly conservative families.

“I remember an early date, we went to the Des Moines capitol after hours and we brought a bottle of wine and we sat and drank it on the steps of the State Capitol Building,” Karen recalled.

“I remember that!” Lois said.

They were confident they’d be together forever. The women decided they were married in their hearts and minds, and set Feb. 24, 1986 as their anniversary: February 1986, because it was the month they “knew they were more than friends,” and the 24th because Lois was born on May 15, Karen June 9, and 15 plus 9 equals 24.

“By the time we graduated college, it would have been easy to gravitate to San Francisco or somewhere with a more out and visible LGBTQ mecca,” Lois said. “But since family was so important to us, we made a conscious decision to stay in the Midwest.” Continue reading…