The temperature was approaching single digits in Coralville on Sunday evening as members of the Agudas Achim Congregation gathered to celebrate the first night of Hanukkah, but inside the atmosphere was warm and bright.

Families were gathering in the auditorium, where the Roots of Rhythm Trio, a Cedar Rapids jazz combo, was playing. There were tables set up for the celebration meal, prepared by volunteers from the congregation, and on each table there was Hanukkah gelt, chocolate coins wrapped in gold-colored foil, as well as little plastic dreidels, the four-sided spinning tops children traditionally play with during the eight nights of the holiday. Each table also had a miniature Hanukkah menorah, and at the front of the room was a large version of the nine-branch candelabra.

Anyone with passing awareness of Hanukkah knows it involves lighting candles on the menorah, but may not know why.

“It commemorates the fight for Jewish independence and the right to practice our religion freely,” Rabbi Esther Hugenholtz told Little Village.

The name Hanukkah is derived from the Hebrew verb meaning “to dedicate,” and commemorates the rededication of the Temple in Jerusalem by leaders of a revolt against the Seleucid Empire, which had colonized Judea. The occupiers had attempted to outlaw Jewish religious practices and had desecrated the Temple, erecting an altar to Zeus inside it.

Lighting the Temple’s golden menorah was part of the rededication, but there was only enough consecrated oil for one night of light. According to tradition, the oil lasted eight nights, until more consecrated oil could be pressed.

“It’s like a conflation of two narratives,” Hugenholtz said. “One of pride, independence and resistance, survival against the odds of a small group of people against a large powerful force. The other is about bringing in light and joy, and proclaiming this miracle of our continuity and our salvation, and some say, our deliverance, and sharing that light with the rest of the world.”

“So, it is about pride and it is about lights. And it’s both very idealistic and hopeful, but it also has a little bit of punch and grit to it. I think that combination is very Jewish.”

And in the United States, Hanukkah has also developed some distinctly American traits. Hanukkah is “less ornate” in Europe, Hugenholtz said. The rabbi was born in the Netherlands, and grew up there and in Spain. She served as rabbi of a congregation in the United Kingdom before coming to Iowa.

“Part of it has to do with how Christmas is celebrated in the United States, although Hanukkah is definitely not Jewish Christmas,” Hugenholtz said. “It is its own festival with its own themes.”

The rabbi also points to “a little bit of commercialization” as something both celebrations have in common. On Sunday night, several people were wearing “ugly Hanukkah sweaters,” a trend that started after ugly Christmas sweaters became a popular fad.

Hanukkah isn’t one of the High Holidays, and doesn’t hold the same level of religious significance as Christmas does in the Christian calendar. But the date of Hanukkah always falls near the date of Christmas, and both come near the winter solstice.

“It gets cold as heck here, and I actually think that’s shaped Hanukkah in an interesting way,” Hugenholtz said, explaining that in Holland winter temperatures rarely go below the mid-20s, so her first winter in Iowa was something of a shock.

“We recognize that with a continental climate like this, where there’s snow on the ground and it gets really cold and it gets really dark, many cultures gravitate towards celebrating the solstice. So, in as far as there is cross-fertilization between the two holidays, I actually think it’s rooted in the lived experience and the climate.”

Short days, long nights and brutally low temperatures create a need for people to gather together to enjoy each other’s company. And the joyful aspect of the holiday filled the room in Coralville on Sunday.

Following the blessings and lighting of the first candle on the menorah, Rabbi Hugenholtz picked up her guitar and called for all the children to come up front and dance while she and the Roots of Rhythm played “S’vivon Sov Sov Sov” (“Dreidel spin, spin, spin”) a traditional Hanukkah song for kids. Once the very enthusiastic dancing finished, the communal meal was served. 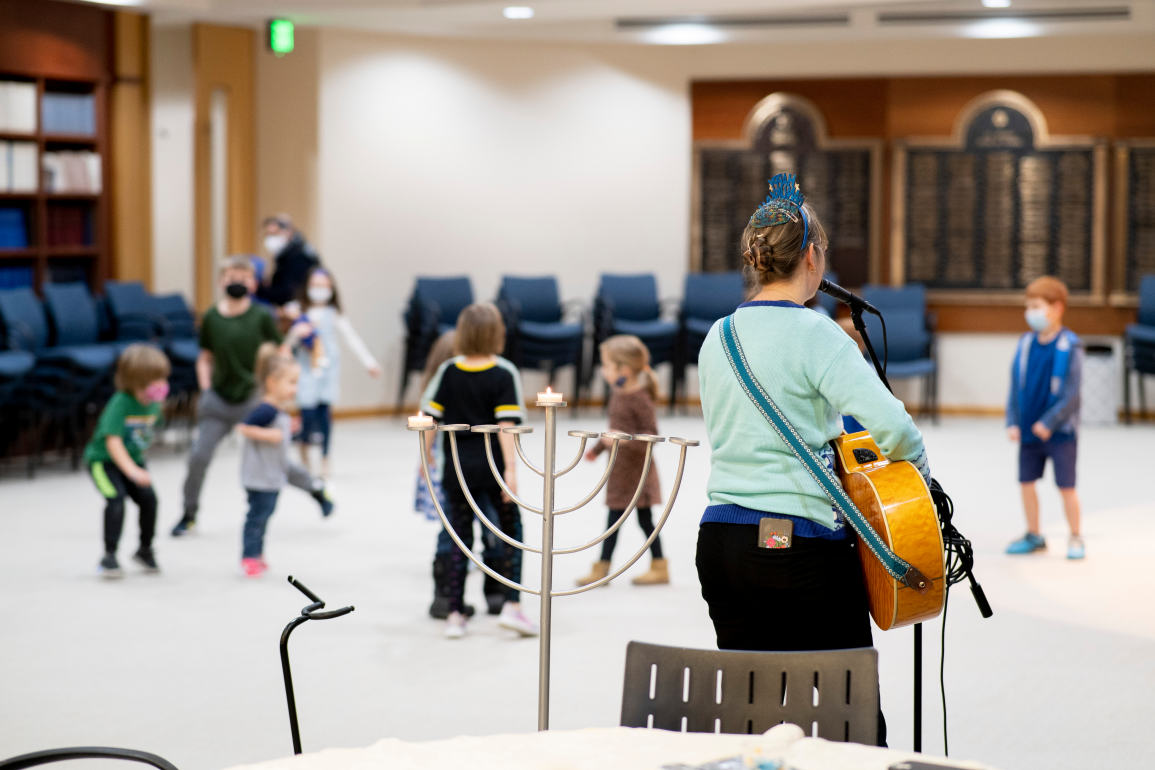 Nationwide, this year’s Hanukkah celebrations come against a backdrop of rising acts of anti-Semitism. It was something Attorney General Merrick Garland addressed at the lighting ceremony for the National Menorah in Washington D.C. on Sunday night.

“All of us at the Department of Justice will never stop working to confront and combat violence and other unlawful acts fueled by hate,” Garland said. “That is our legal obligation.”

There have been numerous incidents over the past few years of flyers being distributed by a neo-Nazi group in eastern Iowa. And earlier this month, anti-Semitic flyers were anonymously distributed in Coralville.

Hugenholtz said that with “that ugliness comes a great amount of pushback in a beautiful way.”

“We have gotten a lot of community support here. People were really galvanized by the leafleting incident to reach out to us,” she said. “The mayor did, the city of Coralville did, individual citizens of the neighborhood did, and we have felt a lot of love.”

“While it is unsettling on one level, it also makes us more determined and more stubborn to be publicly Jewish and to live our Jewish lives with joy and passion and love for our own heritage, and love for all of humanity.”