After months of delays, Iowa City’s Ad Hoc Truth and Reconciliation Commission (TRC) is close to beginning its work of documenting systemic racism in the community, and collecting the stories of those who have experienced it. During its meeting on Thursday, the TRC voted to endorse a contract with Kearns & West to provide organizational and other services as the commission’s facilitator.

The contract must also be approved by the Iowa City Council. That action is scheduled for the council’s next formal meeting on Tuesday, Sept. 21.

Kearns & West, a California-based firm, provides consulting and support services for clients in variety of fields, and operates at the municipal, state and federal level. Members of the firm have experience assisting commissions similar to the TRC — such as Salt Lake City’s Racial Equity in Policing Commission — and one of its members, Eduardo González, has worked with TRCs in the United States and 19 other countries.

Kearns & West’s proposed budget for its services is broken down into five general categories, each with further subdivisions.

• Convening and understanding how the commission should work: $35,967.50

With the added expenses for technology and travel, the total cost is $197,907. That amount was unanimously approved by the city council at its Sept. 7 formal meeting.

Even though all the councilmembers approved spending what Kearns & West proposed in its budget, some expressed concerns about giving the contract to the firm.

Kearns & West has offices in five states, as well as the District of Columbia, but none in Iowa. Mayor Bruce Teague, Mayor Pro Temp Mazahir Salih and Councilmember John Thomas said they were concerned that using an out-of-state firm as a facilitator may limit the local participation they consider important for the TRC to succeed.

That was an issue Larry Schoole, one of Kearns & West’s directors, addressed during a presentation to the TRC on Sept. 2.

In their discussion before voting to endorse the contract at the Thursday meeting, members of the TRC addressed a different concern — a lack of adequate support staff to work with commissioners and Kearns & West.

The facilitator agreement presented by the firm repeatedly mentions working with a “city staff team” to assist with in-person public events and plan meetings. Currently the only support staff the TRC has is Stefanie Bowers. Bowers is the director of the city’s Office of Equity and Human Rights, and also serves as city’s staff liaison for the Iowa City Human Rights Commission.

“What should come first: the chicken or the egg?” Gathua asked. “I vote to move forward than being where we are, or going back.”

Some commissioners said they were disheartened by what they considered a lack of support from the city council.

“Maybe we should tell the city council that maybe Iowa City isn’t ready for a Truth and Reconciliation Commission,” Commissioner Daphney Daniel said.

Commissioner Eric Harris expressed the same sentiment, “The government of Iowa City is not ready for a TRC.”

But others like Commissioner Kevin Rivera argued that the facilitators might help mediate the tense relationship between the TRC and the city council.

Another concern was the timeline. The TRC is scheduled to submit a final report, with its finding and recommendations, to the city council on June 30, 2022.

“This is not enough time to do what we need to get done, and we need to put our best foot forward,” said Commissioner Chastity Dillard.

Rivera agreed that “time crunch isn’t ideal,” but pointed out that the TRC may not exist after the June deadline. “I don’t think we should delay anything,” he said.

During his presentation to the TRC, Schoole said that similar commissions usually take two years to collect testimony and prepare a report, but believed the TRC could accomplish its mission even with its tighter time frame. The Kearns & West team proposed a 12-month timeline for the commission to do its work. 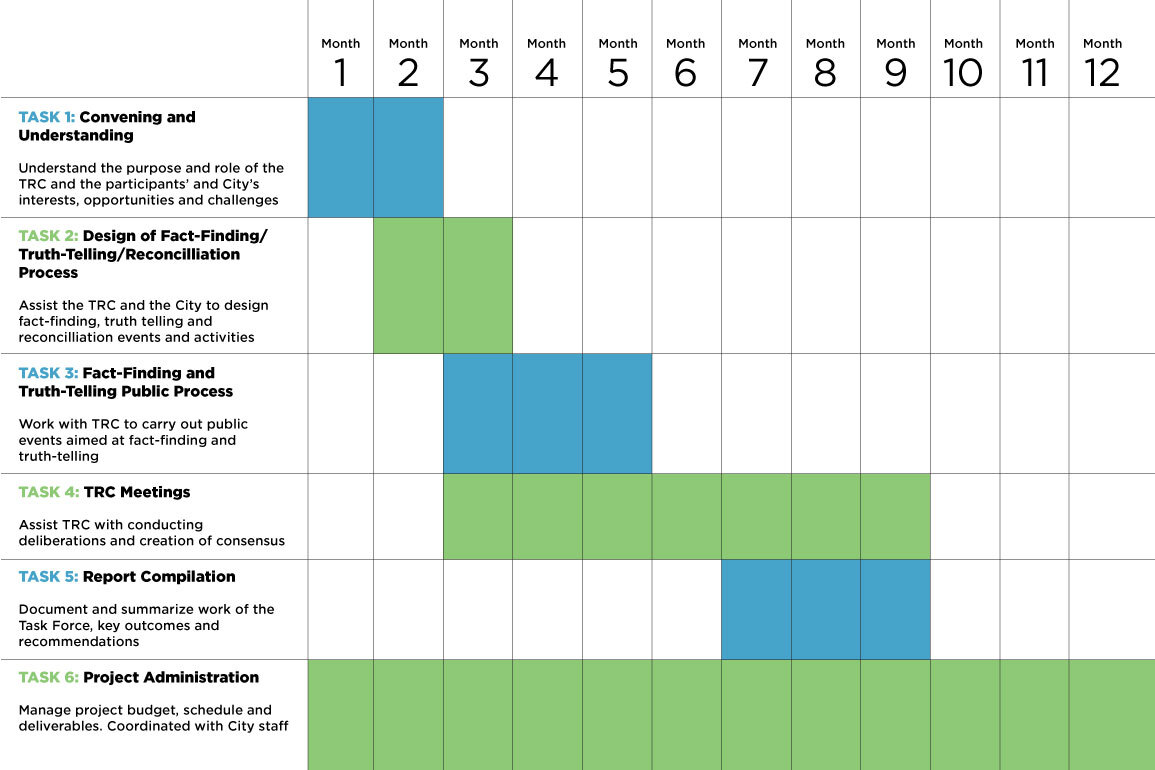 Despite the concerns the commissioners voiced on Thursday, they voted 7-0 to forward the facilitator contract to the city council with their endorsement.

It’s not surprising the commission has had difficulty in moving forward since it first began meeting last December, because Iowa City’s TRC is somewhat unique. Typically, these types of commissions operate at the national or state level, like South Africa’s TRC that formed following the fall of apartheid, or Canada’s TRC that dealt with the history and impact of the country’s policies on its indigenous peoples.

There was a local-level TRC in Greensboro, North Carolina, but that was not an official city commission. It was created by community members in 2004 to examine an event known as the Greensboro massacre, in which members of the Ku Klux Klan and the American Nazi Party killed five participants of a “Death to the Klan” march in 1979.

Some cities across the country have created commissions similar to Iowa City’s TRC, but with a sole focus on systemic racism in law enforcement. Iowa City’s commission has the much broader charge of looking at the impact of system racism throughout the community; not just in law enforcement, but also in such areas as housing, education, health care, local government and financial institutions.

The TRC is part of the 17-point resolution to address systemic racism the city council passed in June 2020, following the protests in the city sparked by the murder of George Floyd by a Minneapolis police officer. The council left it up to the members of the TRC to create their own procedures and determine how best to proceed, although it did specify the commissioners should hire a facilitator to support their work.

The early months of the commission were marked by disagreements among commissioners and the same preliminary topics being repeatedly addressed and voted on. In March, the commission’s problems resulted in four commissioners resigning and its newly hired facilitator quitting before he’d begun his work. The city council then suspended the TRC’s work for a month, while it considered how to move forward.

More recently, the TRC and the city council have been at odds over the budget. The city council has twice deferred taking action on an overall budget the TRC submitted in July. Several councilmembers had concerns over certain items, including a $1,000 stipend per month for commissioners, as well as backpay for previous meetings. None of the city’s other commissions provide such stipends for members, and Mayor Teague and most other members of the council have said they are not in favor paying members of the TRC.

The TRC decided at its Sept. 2 meeting to submit the request for the $197,907 for a facilitator as a lone budget item to bypass any contention regarding its overall budget.

Despite all the difficulties over the past 10 months, commissioners still express a determination to complete the task the city has set for them.