The Oracles of Iowa City mural is finally completed after months of work. The figures stand tall over East Burlington Street with two stark messages: “Black joy needs no permission” and “Weaponize your privilege to save Black bodies.”

Artists Antoine Williams and Donté K. Hayes designed the nearly 70-foot murals that now decorate the Capitol Street Parking Ramp. The project is headed by Public Space One and the Center for Afrofuturist Studies, in cooperation with the Iowa City Public Art Program and the University of Iowa.

The paintings evoke W.E.B. Du Bois’ idea of “Double Consciousness,” or how widespread racism can create an internal division within African Americans and other minorities.

Du Bois writes, “It is a peculiar sensation, this double-consciousness, this sense of always looking at one’s self through the eyes of others, of measuring one’s soul by the tape of a world that looks on in amused contempt and pity.”

This might refer to how innocent actions, like walking home at night or grabbing your phone from your pocket, could be interpreted as dangerous or sinister. The hyper awareness of your actions and character produces two conflicting perceptions, yours and the other’s, but both exist within your mind simultaneously.

The project sprung from a conversation between Loyce Arthur, associate professor of design at the University of Iowa, Marcia Bollinger, public art program coordinator, and Wendy Brown, who serves on the Public Art Advisory Committee.

“We started think about this project after what happened, the George Floyd murder. And we wanted to do something,” said Arthur, who became a project advisor later on. “One of the key things after George Floyd’s murder was the helplessness, and a sense of what can be done.”

Following the Black Lives Matter movement last year, the city passed a 17-point resolution to address systemic racism in Iowa City. One action was to “increase opportunities for artistic expression by communities of color.”

The total cost of the project was over $42,000. The Iowa City Public Art Program provided $30,000 to help fund the project. The University of Iowa Office of the Vice President of Research contributed around $12,500.

Jill Wells, Marissa Hernandez and Janiece Maddox painted the mural.  Maddox is a painting fellows through the Iowa Center for Research by Undergraduates (ICRU).

“It was really scary. I’d never been on a lift before,” Maddox said. “The highest I’ve got is probably like 10 feet on scaffolding, so 60-70 feet in the air was like not anything I’ve ever done before.”

Maddox thinks the murals will help elevate the voices of minorities in the community and that they will help inspire change.

“I hope people at least feel something looking at it. I think, one way or the other, if they like it, if they don’t like it, at least they’re thinking,” she said. “And thoughts usually lead to actions, hopefully good ones. So I think it will just make people pause at least.”

The mural is only the beginning. Project leaders hope the mural will instigate public discussion. They are hosting a community conversation about the mural and its message this Saturday at 4:30 pm in the Iowa City Public Library’s Meeting Room A.

Throughout the process, they gathered public input through an online survey. According to its current results, 64 percent of white respondents support the murals as opposed to 40-50 percent of minority respondents.

In the raw survey results, many expressed concern over the word “weaponize” and the phrase “Black bodies,” saying that it sounded violent or dehumanizing.

“There was always concern that the words would cause undue attention to the Black community,” said Arthur. “That too is a conversation. In terms of, you know, we don’t want to say that we’re speaking for the whole Black community. What other voices need to be heard? Who else needs focus? So it can help with that as well.”

“It’s a privilege to save Black bodies. Everybody has some sort of privilege. You don’t have to be white, Black, Asian, you know,” he said. “I have a privilege especially in the creative field. And what that means is that I should use that privilege to make sure the conversation continues.” 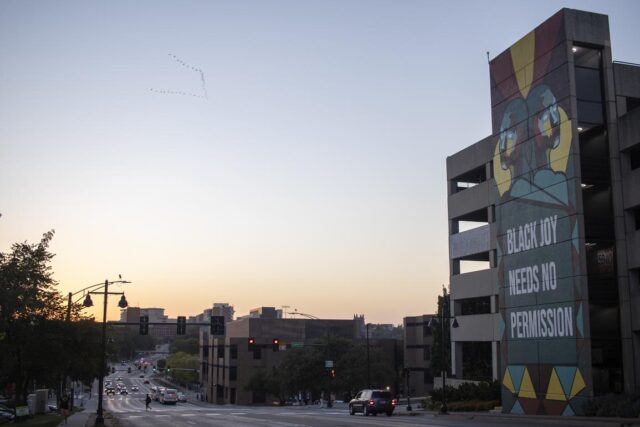 Ebong, who is from Nigeria, felt connected to mural and its the West African influences. “I felt like I was meant for this project, if that makes any sense,” he said.

He is creating a documentary about the project to show how it will promote change in the future. Working with the artists taught him to understand “what you’re trying to put out there in the world, and not being apologetic for it.”

But the Oracles project goes beyond just the mural. It is the first step on a long-term community engagement project. As Williams repeatedly says, “A mural is not enough,” a phrase that hung over the project from beginning.

“The arts in themselves can’t make change. But they can be an irritant. They can be a reminder. They can be a little sort of spark that keeps sort of nagging at it and saying, ‘Pay attention,’” said Arthur. “I hope it’s gonna be a catalyst. I don’t expect anything to happen just from the fact that the murals are there. It’s what happens next.”