With only a few days left before schools across Iowa reopen, Gov. Kim Reynolds denounced efforts by President Biden to prevent state governments, including Iowa’s, from prohibited face mask requirements in schools.

Briefly speaking to reporters after participating in an event promoting Hy-Vee’s Indy-car racing team at the supermarket chain’s West Des Moines office complex, Reynolds said Biden’s push to have schools follow CDC mask guidelines was the result of him “kowtowing to the teachers union.”

“It is such a disservice and unconscionable what they are doing to those kids,” she said.

It was not clear from the governor’s response who she meant by “they” or “those kids,” or what “unconscionable” things are being done. Reynolds then veered from masks in schools to criticize Biden’s policies on Afghanistan and the U.S./Mexican border, as well as what she called the president’s lack of media availability, which she also called “unconscionable.”

In a press gaggle this morning, @IAGovernor addresses the letter she received from the Biden admin. regarding Iowa's lack of a mask mandate for students.

She says Biden needs to do his job, & also calls out the president for not taking questions from the press.@weareiowa5news pic.twitter.com/tBaymV1hUb

The safe return to in-person instruction requires that school districts be able to protect the health and safety of students and educators, and that families have confidence in that their schools are doing everything possible to keep students healthy. Iowa’s actions to block school districts from voluntarily adopting science-based strategies for preventing the spread of COVID-19 that are aligned with the guidance from the Centers for Disease Control (CDC) put these goals at risk and may infringe upon a school district’s authority to adopt policies to protect students and educations as they develop their safe return to in-person instruction plans required by Federal law. [emphasis in the original]

Similar letters were sent to the governors of Arizona, Oklahoma, South Carolina, Tennessee and Utah on Wednesday, and last week, DOE also warned the governors of Florida and Texas that their executive orders banning masks in schools might violate federal law. Unlike those two states, Iowa’s ban isn’t an executive order — it was signed into law by Reynolds in May.

The CDC revised its guidance regarding mask-wearing in July, as the highly contagious Delta variant became the dominant strain of coronavirus in the country. Current guidance calls for masks to be worn by everyone in a school building over the age of 2, regardless of vaccination status, in order to protect children under 12 and others who cannot be vaccinated.

Speaking at the White House on Wednesday, Biden said governors who ban masks are “setting a dangerous tone.”

“Unfortunately, as you’ve seen throughout this pandemic, some politicians are trying to turn public safety measures — that is, children wearing masks in school — into political disputes for their own political gain,” the president said. “We are not going to sit by as governors try to block and intimidate educators protecting our children.”

Biden said he had instructed Sec. Cardona to take action — including possible legal action — to have school mask bans lifted.

In an interview with the New York Times on Wednesday before Biden spoke, Cardona said he was “appalled that there are adults who are blind to their blindness, that there are people who are putting policies in place that are putting students and staff at risk.”

“At the end of the day, we shouldn’t be having this conversation,” he added. “What we’re dealing with now is negligence.”

We have a crisis at the border, a disaster in Afghanistan, and inflation is soaring. President Biden is failing on each of these issues, yet he is now launching an attack against governors like myself for trusting our people to decide what’s best for them. The President’s priorities are misplaced. I have had enough, and I know Iowans have too.

I’ll continue to do whatever is necessary to defend and preserve the fundamental rights and liberties afforded to any American citizen.

In addition to banning school districts from being able to mandate masks, the law Reynolds signed in May also strips cities and counties of the authority to create any mask mandate stricter than whatever mandate the state government has. Iowa, of course, has no state-level mask mandate, and Reynolds has been clear that she will not issue one.

The rate of new cases of COVID-19 continued to grow over the most recent seven-day reporting period, according to the weekly public update issued by the Iowa Department of Public Health on Wednesday night.

IDPH also reported another 16 deaths from the virus, bringing the total number known COVID-19 deaths in Iowa to 6,226.

Hospitalizations continued to increase during the most recent reporting period. On Wednesday, IDPH reported 396 hospitalized COVID-19 patients, up from 355 during the previous seven-day period.

The latest data from the CDC’s online tool for tracking county-level spread of COVID-19 shows 98 of Iowa’s 99 counties are experiencing substantial or high levels of virus spread. Of those 98 counties, 86, including Johnson and Linn, are in the high category. 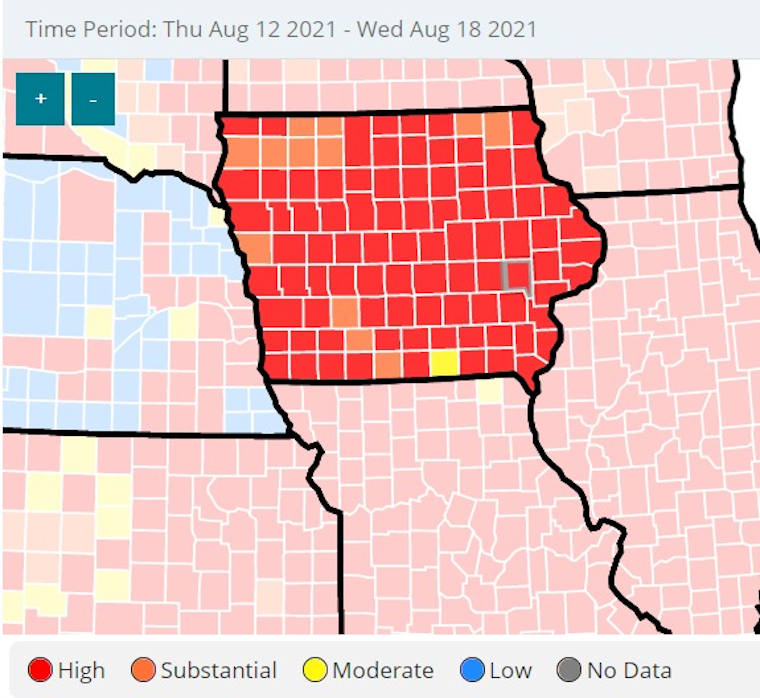