“Big, if true” is a years-old meme used on Twitter to parody journalists who retweet unverified news reports or bombshell rumors accompanied by a noncommittal phrase. The meme makes a joke out of dull, dumb, or understated headlines: “Macauley Culkin dined out in Los Angeles today.” Big, if true. “Alex Jones says the Pentagon is poisoning the water and turning all the frogs gay.” Big, if true. “People tell lies on the internet.” Big, if true.

As these things do, the meme has gone stale in recent years. But earlier this week, Rep. Mariannette Miller-Meeks (R,IA-02) made a bold attempt to resurrect and rebrand BiT.

“If true, this is insane!” was Miller-Meeks’ version, tweeted from her official account as a member of Congress. The freshman Republican linked to an article from a blog that publishes “not real” content, by their own description, with the headline “Biden Orders VA To Withhold Health Benefits From Unvaccinated Veterans.”

Big, if true, maybe, but decidedly not true.

Twitter users expressed confusion and anger in the comments, clarifying for others that the website, DelawareOhioNews.com, isn’t a news source. Criticized for sharing false news, Miller-Meeks addressed the tweet in a statement to reporters later that day.

“I retweeted a story about President Biden requiring the VA to withhold benefits from unvaccinated veterans, saying ‘if true, this is insane.’ The story and website is obviously satire and makes a powerful point. President Biden’s executive orders about COVID-19 have been classic examples of government overreach and these days the unbelievable has become reality.”

She did not delete the tweet, hadn’t as of the publication of this article and, if it loads when you click this link, Miller-Meeks still hasn’t deleted the misleading tweet. 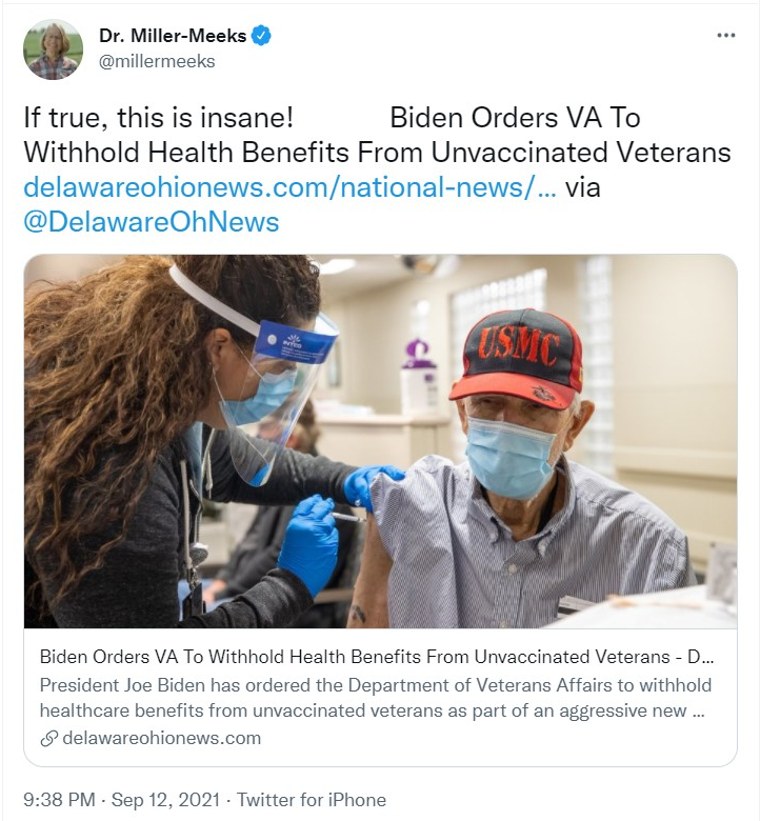 It’s impossible to know Miller-Meeks’ intentions when she sent the tweet into the world, or whether she’d even read the article to which she’d linked. It is, of course, debatable whether the article, and her big-if-true framing of it, are “obviously satire.”

While most posts to DelawareOhioNews.com are clearly tongue-in-cheek — “Taliban Launches OnlyFans Competitor OnlyQurans,” for instance — this headline reads rather clinically, and could ring with some degree of authenticity if one knows that President Biden has required federal employees to be vaccinated or secure an exemption. The image above the title is an innocuous stock photo with no apparent edits, and the design of the website once one clicks through looks standard for a news blog.

The article itself doesn’t become “obviously” satirical until the third or fourth paragraph, when the author begins spinning a fictional Biden speech that ends with the president calling veterans “wiseguy dumb-dumb boys.” It quotes veterans called John Bigolballs and Tony Who Gives a Fuck About Any Of This Shit — a blue brand of humor not particularly on brand for the 66-year-old Iowa Republican and U.S. Army veteran.

The piece is certainly facetious and makes the point that veterans face health threats beyond COVID-19 — PTSD, substance abuse, etc. — that the federal government could do more to address. But as satire, it’s a little confusing; the author attempts to make these points on the specific, false premise that President Biden would dare blackmail veterans over the COVID vaccine, which he has not.

Regardless of the content of the article — which one can never assume the average Twitter user has read before reacting to — the eye-catching headline fooled enough people that the Associated Press decided it warranted an official fact-check.

According to AP reporter Sophia Tulp, “Dozens of people took to social media to voice their disapproval for what they believed was a new executive order from Biden.”

But the worries proved to be unfounded as no such directive or executive order exists. ​​In a statement to The Associated Press, the Department of Veterans Affairs confirmed the claims were untrue.

“The President has not and will not withhold benefits to Veterans who choose not to be vaccinated,” Veterans Affairs Press Secretary Terrence L. Hayes said. “The spread of this misinformation is extremely detrimental to our Veterans and their families and should cease immediately.”

Tulp traces the misinformation back to DelawareOhioNews.com and “U.S. Rep. Mariannette Miller-Meeks, a Republican from Iowa, [who] was among those who tweeted a link to the satirical article. She wrote in her tweet: ‘If true, this is insane!'”

The tweet incident, and Miller-Meeks’ refusal to accept responsibility for spreading misinformation, prompted critics to highlight other perhaps more damaging Twitter missteps from the eastern Iowa Congresswoman, who starts her Twitter bio with “Doctor.”

“Miller-Meeks — an eye doctor and not an expert on vaccines or infectious disease — has promoted natural immunity as being supreme to COVID-19 vaccinations,” the editorial staff at the Ottumwa Courier, her hometown newspaper, noted in a Sept. 14 piece. “There isn’t enough information to make that statement, but even if there were it sends the wrong message. It’s better to get immunity from COVID-19 through a vaccine than waiting to get infected. And those who have had prior infection still have a lot to gain by getting vaccinated.”

“In July, she tweeted that children ‘don’t transmit virus to adults or other children.’ She appeared on a Fox Business show with a similar message. We know that statement is patently false. Last week, children accounted for a third of new cases in Iowa.”