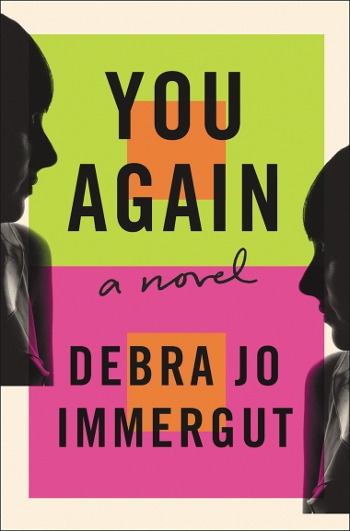 The em-dash is by far my favorite punctuation. It’s useful as a break, a pivot point: It comes in handy often at Little Village, as we believe ellipses should only indicate removed material. The casual “pause ellipses” that pepper social media are a no-go in our stories and interviews, so that elapsed time, that silent space, that trailing off has only one true portrayer: the em-dash.

With any writing element that I adore, I am hyper-sensitive to its overuse (I learned my lesson breaking my tragic eighth grade comma addiction). So in the beginning of Debra Jo Immergut’s You Again (Ecco Press), I bristled. Why use a distinctive em-dash where a simpler comma would do, I thought. And, Well that one’s flat wrong, I’m almost certain!

I was wrong. As I sunk deeper into the experience of the novel, it became clear that the Iowa Writers’ Workshop grad’s use was precise, as much thematic as functional. I imagine her fighting with a blindered editor like me to retain each one. You Again is fundamentally concerned with breaks, pivot points and especially elapsed time, in a way that justifies every use. Even — especially — where it feels wrong.

Immergut’s taut thriller follows the story of Abby Willard, a 46-year-old wife and mother of two who is squandering her early art school promise doing graphic design for pharmaceuticals. Spotting (and later interacting with) her early 20s self sets her down a year-long spiral of self-doubt that pulls in familiar threads of many mid-40s women’s stories: rekindled friendships, creative parenting choices, marriage hurdles, reexamined life decisions.

But woven throughout, bringing a broad smile to my face the first time it appeared, are the reflections and communication of two scientists and a police officer, trying to piece together the details of Abby’s story from the vantage point of the following year. It’s a masterful use of a common trope, allowing past, present and future to converge in a way that echoes Richard Powers while steadfastly holding its place in the world of speculative fiction.

The key to Immergut’s success is her descriptive strokes. Every scene is awash in detail; when artist Abby dwells on a coworker’s comment, “Color is your competency,” it’s clear that’s true of Immergut as well. But Immergut is also a master of the principle of Chekov’s gun. Nothing set up is thrown away. And every time you come across one of those moments of realization, you find your mind skipping back, wondering what other hints and clues she left along the way.

Time collapses on itself in subtle and overt ways throughout You Again. “THE PAST IS PRESENT,” a sign reads at an antifa rally late in the story. “New York City is full of ghosts,” reads a work log entry from the physicist. “For anyone who’s ever lived here, this place is a haunted battlefield.” At a bar she frequented in her youth, Abby notes the juxtaposition of the young, posh clientele against the place, “so the bar’s crust and gloom had the faux quality of a historical re-creation.”

There is an em-dash between Abby’s 46- and 22-year-old selves, a time lapse, a ghost. The way that Immergut unravels that silent space is riveting. There’s not much more that can be told without spoilers, but trust me: Sit with any discomfort any of it may bring you. The payoff is worth it.