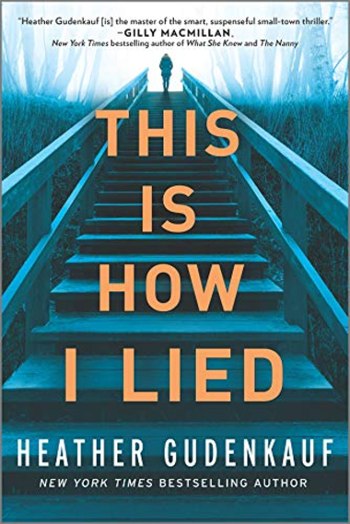 After Gillian Flynn’s Gone Girl became a runaway bestseller in 2012, there was a lengthy period of time during which it seemed as though every thriller written by a woman who was hailed — by the publishers, by those who wrote blurbs, by reviewers — as the next thing to read if you loved Flynn’s novel. On the one hand, it was an understandable marketing move; on the other, it was almost always an example of failing to manage the reader’s expectations.

Truthfully, I seldom, if ever, thought any of those so-called heirs to Gone Girl were as good as the book to which they were compared. Indeed, the only novels I read during that period that I felt held up to any sort of comparison were Flynn’s earlier novels Sharp Objects and Dark Places.

But I found myself thinking of Flynn’s work quite a bit as I read Heather Gudenkauf’s new novel, This Is How I Lied, released in May. The novel is centered on a cold case in an Iowa community. Maggie, who, as a teenager, found the body of her best friend in some nearby caves, is now a police officer. She is also seven months pregnant, and she and her husband have sacrificed much to bring this child into the world.

When new evidence is found in the case of the murdered girl, Maggie takes charge of the case—bringing the past and the present into collision as the reader is taken back and forth between the day of the crime and the present investigation (quite by accident, that present investigation takes place in what must now be understood as an alternate reality version of June, 2020 in which many things might go wrong, but there is no pandemic).

Gudenkauf — a University of Iowa graduate, Iowa resident and bestselling author whose novels are set in various fictional Iowa locales — has penned a thriller that is reminiscent of Flynn’s novels in a number of ways. There is the sense of small-town claustrophobia, the long hidden secrets, the animosity between children and parents, the partners who are suspicious of one another and more — including a well-executed twist that lands on about the same beat as the famous Gone Girl shocker.

Seen a certain way, it may seem as though I’m damning This Is How I Lied, if not with faint praise, then with the notion that it is somehow derivative of Flynn’s fiction. That is not my intention at all. Gudenkauf’s thriller is tightly written and filled with memorable and fleshed out characters — and it steadily raises the stakes for all of those characters as the story progresses. It is a dark and twisty tale that, yes, will satisfy fans of Flynn’s work. But it is excellent work in its own right, as well.

This article was originally published in Little Village issue 284.