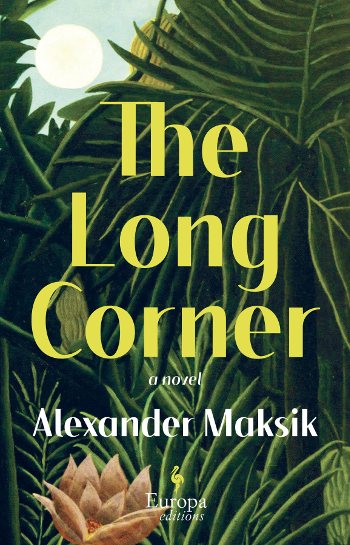 Alexander Maksik’s new novel The Long Corner (Europa Editions) — out May 17, the fourth release from the University of Iowa Writers’ Workshop grad — skillfully explores the intersections of capitalism and dictatorship, cliché and originality, art and life. By the end, the reader is left to question if these things are opposites at all, or if they are more entwined than we ever imagined.

Set a year into the Trump administration, The Long Corner follows Sol, a depressed New Yorker living a stagnant life. Once, he was a journalist writing profiles on some of the most famous visual artists in the city. Now, he is resigned to writing slogans for an advertisement agency, much to his grandmother’s disappointment. At an especially dull work party, Sol is approached by a strange woman who invites him to the Coded Garden, a haven for visual artists led by the eccentric and mysterious Sebastian Light. At first Sol turns the offer down, but when tragedy strikes, he decides to embark on the journey in an attempt to reignite his long-lost passion.

Filled with colorful characters, dry humor and unsettling situations, The Long Corner is a Rorshach test for a reader’s own views on government, nobility and the self. Much like the paintings Sol experiences in the book, the longer you look, the more you learn about the chaotic yet familiar world Maksik has built here.

The role of the Trump administration has chiefly occupied my mind since finishing The Long Corner. The stage has been set quite deliberately, and we go in assuming that Sebastian Light will be our DJT stand-in. While that’s not entirely correct, it isn’t incorrect either. Maksik subverts absolutes in this book time and time again, and he does so with who our villain is as well.

This may just be the point. In a world where opposing ideas end up being one and the same, we are encouraged to find the gray area in everything Maksik presents. Perhaps rather than making a comment about politics or art, Maksik is trying to say that things are rarely as they seem.

Because this book is centered around visual art, it feels only right to compare it to a painting. Reading the dialogue feels like looking at Edward Hopper’s “Nighthawks” and hearing the words spoken by those nocturnal diners. It is pretentious but fearful, forthcoming but evasive — yet more gray areas that Maksik fills his pages with.

As heavy as the topics are, I cannot overstate how funny this book is. Maksik has found the key to an effective thought-provoker: Don’t let them go too long without cracking a smile. Through Sol’s dry commentary on the absurdity happening around him, we are able to find light in the very dark pockets Maksik allows us to peek into. And frankly, it’s necessary. A less talented writer would have emitted the humor so as not to distract from the point, but in novels as in life, we must find something good to break up the cruelty and randomness.

My little English major heart fluttered all the way through this one. It had me yelling across the apartment to my partner as mysteries were uncovered, characters were betrayed, edens set on fire. Perfect for a deep-thinking book club, I guarantee you won’t be able to keep your thoughts to yourself.