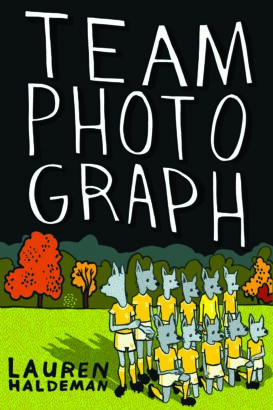 Little Village comic contributor Lauren Haldeman’s fourth book, Team Photograph (out Nov. 8 from Sarabande Books) is a poignant exploration of how we’re shaped by the places where we grow up. This graphic novel combines Haldeman’s iconic wolf-headed style with erasure poetry to rehash her youth on soccer fields 800 feet away from the battlefields of Bull Run in Virginia.

Throughout her childhood, Haldeman saw ghosts of Civil War soldiers in her house and on the soccer fields. As she got older, she began questioning why she saw the specters. Is it because they wanted to be seen? Why is she the only one who saw them? In Team Photograph, she dives into those memories alongside the American history that accompanies them to ultimately confront the death of her brother.

On first glance, Haldeman’s wolf figures are cute and disarming. Flipping through the book casually, one might assume that Team Photograph is about a fuzzy soccer team on their way to win a championship. It’s only when you start reading that the darker themes of the book — racial inequities, trauma hallucinations, the loss of loved ones — come through.

And while some say graphic novels soften the blow of heavy topics by translating them out of real life, I’d argue that Team Photograph packs an even heavier punch because Haldeman’s illustration style entices you to look longer. In the faces of her wolves, we see Haldeman, historical characters and possibly ourselves, as we grapple with the weighty contents of the book.

This is especially evident when Haldeman discusses the Robinson House, which was home to an often forgotten Civil War-era Black family. The house remarkably survived the war relatively unscathed. Over a century later, despite the house’s status as a historical symbol, it was burned down by arsonists, who some speculate may have been motivated by racist hatred.

Despite living near the Robinson House her entire life, Haldeman only learns about it when visiting Virginia after her brother’s death. She further meditates on the erasure of the Robinson family’s history by bringing them to life in their own family photographs, complete with wolf faces.

It’s here, and at several other moments throughout the book, that we are hit with the horror in our history and our natural instinct to turn away from gruesome things. But, as Haldeman discovers, ignoring our history only keeps its ghosts around longer. Sometimes we must confront the uncomfortable in order to move forward.

Melancholy yet powerful, Team Photograph is an intertwining of histories that ebbs and flows with ease. Combining graphic novel elements with poetry brings a cohesion that nods to the complexities of history without getting too muddy. It’s a quick read that you can pick up again and again, each time catching something new.

This article was originally published in Little Village’s October 2022 issues.