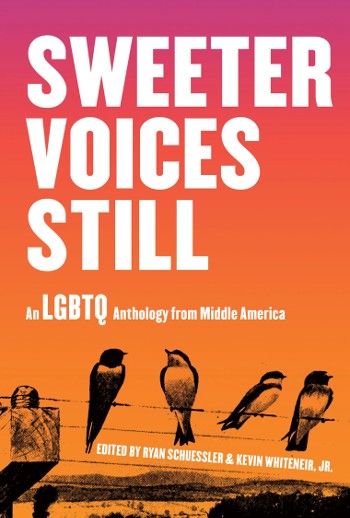 The mythology of “the Heartland” (also called “Middle America” or the “flyover states”) is usually rooted in archaic abstractions such as “traditional family values” and conservative ideals. These parts of the American landscape are described as if they are closed off by narrow boundaries, with rigid attitudes imposed upon the diverse populations inhabiting them.

As noted by historian Kristin Hoganson, “The heartland myth does a great injustice not only to the United States but also the people it purports to depict, because it distorts their history and hides far more fascinating stories.”

Sweeter Voices Still is packed page to page with such stories. Co-editors Ryan Schuessler and Kevin Whiteneir, Jr. have assembled an impressive anthology of essays, poems, letters and stories from LGBTQ voices gathered from across the Midwest, the Rust Belt, the Great Plains, the Upper South, Appalachia and Amish Country (areas comprising the so-called “Heartland”).

Since there are many wonderful sections of this work to choose from, I will highlight two of them from here in the Hawkeye State. The first is titled “Excerpts from the Memoirs of Gene Dawson” (Parnell, IA). The author was born in the Armah, Iowa area in 1931 and lived in St. Louis until his death in September 2020. Before his passing, he published his memoir Farm Boy, City Girl: From Gene to Miss Gina last April.

Included in this volume are excerpts from the years 1951, 53 and 54. As a young man having difficulty coming to terms with his homosexuality, Dawson says he will “lead a double life and always be on guard or be ostracized by family, friends, community and church.” Within a few years, he instead embraces his new life of adventure.

Jocelyn Krueger, a multidisciplinary artist with degrees from the University of Iowa and Indiana State University, crafts a powerful and poetic narrative capturing the pain of when self-acceptance clashes with the perceptions others cling to, tenderly capturing the agonies and heartbreak following the demise of a friendship with the story “Before there was, blink” (Cedar Falls, IA).

“I would later learn that blinking is tied to how we remember, like bookmarking your thoughts and experiences for future recall,” Krueger writes. “Now I wish I had blinked less as a young girl. The violence throughout my life towards my girlhood hangs pearlescent over my memories.”

Even if the reader has never been to the geographic locations described, they will recognize the places visited in these pages: the lingering feelings of guilt and rejection slowly cutting into the heart like rusty barbed-wire, the joys of discovery causing pulses to quicken, the heartaches of loves lost and the jubilations of new loves found, including the love of one’s self and love toward others.

Sweeter Voices Still is a marvelous ode to humanity and its passions, but it is also a reminder that LGBTQ individuals and communities (and those who exist outside the confines of the acronym) have always kept the Heartland beating. May their voices continue singing their songs for all to hear.