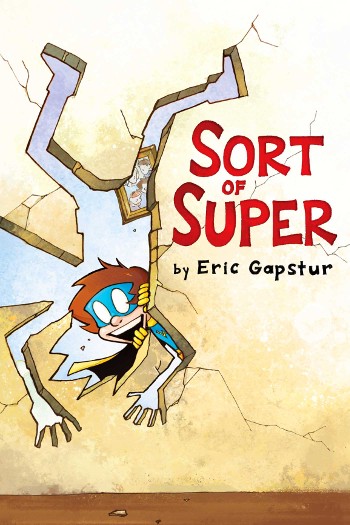 He had to have known it was coming.

There is no way that a competent publicist didn’t prepare Eric Gapstur for the eventuality that his graphic novel about 11-year-old Wyatt Flynn and his family coming to terms with his newly acquired superpowers in the wake of his mother’s disappearance would draw comparisons to the Netflix show Raising Dion, which just dropped its second season this February. Raising Dion, based on the 2015 comic and short film from Dennis Liu, follows the story of 10-year-old Dion Warren and his mother navigating his emerging superpowers after the death of his father.

That story is about a Black family in an urban setting, with an only child, a mother who works in the arts and a big bad rooted in questions of scientific ethics. It feels custom-designed for me. Sort of Super (Aladdin/Simon & Schuster Children’s Publishing) centers on a white rural family, explores sibling dynamics and features a father who works in law enforcement. In other words, it could be argued that I am the furthest thing from a “target audience” that this book could possibly have. That Gapstur wrote this for exactly not-me.

Well, too bad. I fell in love anyway.

There’s something about that age. It wasn’t yet called “tween” when I was experiencing it, but somehow that stretch between 10 and 14 has come to offer something incredibly meaningful and relatable. There’s a whole lot of becoming that happens in those years. And while the Raising Dion comparison may have been inevitable, Gapstur might be caught off guard as I continue by likening it to the Babysitters Club series and the recent film Finding Red.

Wyatt Flynn is navigating that same delicate territory of balancing his responsibilities to himself and to others. When his little sister, Adeline, expresses surprise that the giant W on his costume stands for Wyatt, patiently lecturing him on the concept of secret identities, it’s evident that there’s more than just childish ignorance driving his choice. He’s working hard to understand who he is, and he needs that thread of connection, even while super, to ground him.

But you don’t need a thinkpiece on the wonders of middle grade nostalgia. The keys to this work are in far more than just how well it captures old folks like me. This is a book that’s full of fun, joy and wonder. The exuberance Wyatt and Adeline express, even when faced with situations of adult-level seriousness, is brilliantly captured in Gapstur’s Bill Watterson-esque facial expression details and the way he illustrates Wyatt’s powers, grounded in his DC comics background, but extra: the way an 11-year-old reading superhero books for the first time might experience them.

I don’t often go back and purchase copies of books that I get advances on, but this is one I absolutely will, and there’s one reason for that: Dearbhla Kelly. While Gapstur’s words and pictures are compelling, Kelly’s colors are a delight, capturing that middle grade spirit in their own way. My review copy lacks colors for the second half, and I simply must read the full book as intended.

Without a doubt, though, the best thing about Sort of Super? The “1” on the spine, indicating that there will be more to come.