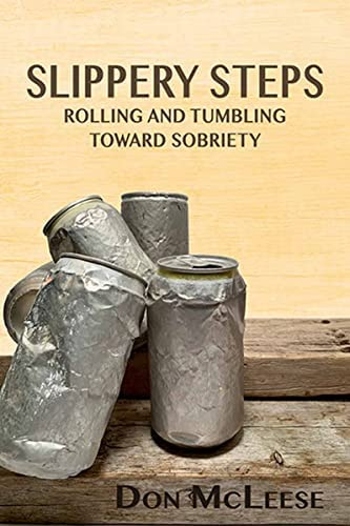 You may have read one of Don McLeese’s previous three books, or perhaps you’ve stumbled upon one of the many pieces he’s contributed to publications like Rolling Stone, Chicago Sun-Times or No Depression. In his newest release, Slippery Steps: Rolling and Tumbling Toward Sobriety (Ice Cube Press), the University of Iowa faculty member confronts the invisible entity present throughout his illustrious rock journalism career: alcoholism.

Since the age of 13, alcohol consumption was a regular part of McLeese’s family vacations, celebrations and life events, which only grew more frequent as he aged. Eventually, McLeese’s drinking brought him to the point where he chose to begin Slippery Steps: a drunken night at his West Des Moines home where he stumbled down his porch steps and passed out in the yard, covered in his own vomit.

It’s a daring endeavor to write something that covers as many years and as many personal details as Slippery Steps does. I reckon that there is no quick and easy way to do it. And while McLeese captured my attention with his personal narrative far longer than many others could have, this book still got tedious at some parts, relying a bit too much on previously stated information.

And that’s a fair criticism to say in a review. But it shouldn’t be the reason you don’t pick up this book. McLeese, through eloquent narration, thoughtful reflection and a few rock and roll stories, provides us with a non-judgmental lens through which to take stock of our own relationship with alcohol, or anything else we may be leaning on a bit too much.

The magic of this book is that our personal relationships with alcohol are never framed as anything other than personal. Even as McLeese delves into his sobriety journey, he never projects or assumes his readers are in the same place. From the beginning to the end, the tenet McLeese holds onto the tightest is that every situation looks different to the people outside of it. The only one who can know if it’s time for you to stop drinking is you.

That said, sober-curious readers who feel a bit too intimidated to go to an Alcoholics Anonymous meeting — this book may especially be for you. Not only does McLeese discuss how he stumbled (pun not intended, but necessary) into AA, but he also talks in detail about each of the steps, the logistics of finding a sponsor and how he did it all as a person unaffiliated with religion.

Alcohol is a part of American culture and it permeates even deeper into Midwest culture. And to deny its omnipresence is to lie about the facts. McLeese isn’t in the business of lying. His honesty, transparency and air-tight narration make Slippery Steps not only an informative read, but an enjoyable one.