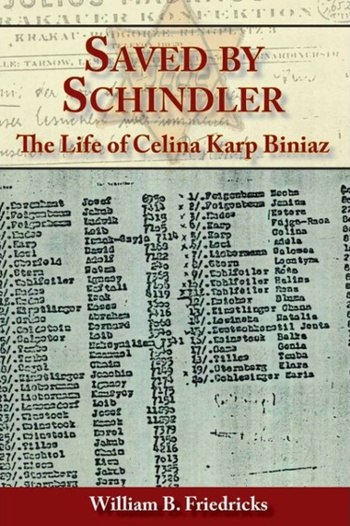 “I am a Holocaust survivor, and every survival story is unique. What makes mine unique is that I was fortunate enough to be on ‘Schindler’s List.’”

These are the words of Celina Karp Biniaz, one of youngest to be included on Schindler’s List and among the last of the remaining survivors.

The story of how Oskar Schindler’s list saved over a thousand Jewish prisoners from death at the hands of the Nazi regime was generally unknown until the publication of Schindler’s Ark by Thomas Keneally in 1982.

The list, according to author William B. Friedricks, director of the Iowa History Center at Simpson College, “was actually several lists, and it referred to a compilation of nearly eleven-hundred names of Jewish prisoners designated to work at businessman Oskar Schindler’s new armament factory in Brünnlitz, Czechoslovakia. Inclusion on its list was essentially a passport to safety and kept the Schindlerjuden (Schindler Jews) from being sent to the Nazi death camps.”

In the first chapter, Friedricks introduces readers to Celina at the age of 8 with her aunt gifting her a white puppy in 1939. This snapshot of her “wonderful childhood” in Poland provides a devastatingly stark contrast to the horrors that awaited them after the Nazis invaded her homeland that year.

When Celina and her parents arrived in Iowa in 1947, most people were not interested in hearing about their painful experiences during the war. They decided to keep the past to themselves, live in the moment and look to the future.

Celina excelled in her studies, graduating from North High School and Grinnell College before earning a Master’s degree at Columbia University. She started a family of her own and fulfilled her calling as an educator, teaching elementary school students for 25 years. For decades, she kept her wartime memories “bottled up, hidden beneath the veneer of her picture-perfect suburban life.”

Then, in 1993, director Steven Spielberg’s Schindler’s List debuted on the big screen, creating a global stage for people to confront the harrowing realities of the Holocaust, allowing survivors to tell their stories to a public now willing to listen.

Breaking her “wall of silence,” Celina started a new chapter of her life, captivating audiences around the country with her story of struggle and survival, which is chronicled in remarkable detail in Friedricks’ Saved By Schindler: The Life of Celina Karp Biniaz (Ice Cube Press, LLC).

Friedricks first heard Celina speak in 2017. Approximately two years later, he was invited by the Iowa Jewish Historical Society to discuss writing a book about Celina’s life, a massive undertaking which proved even more difficult as the world was shaken by the COVID-19 pandemic.

Friedricks was scheduled to meet Celina in March 2020, but the trip was canceled. Social distancing protocols prohibited in-person interviews and restricted access to libraries and archive centers. As evidenced in these pages, the urgency to share Celina’s story triumphs in the end.

Blending scholarly focus with passionate storytelling, this inspirational biography celebrates Celina’s life and the resilience of the human heart in the darkest of times.

This article was originally published in Little Village’s December 2022 issues.