By Lynne Nugent -- The Florida Review 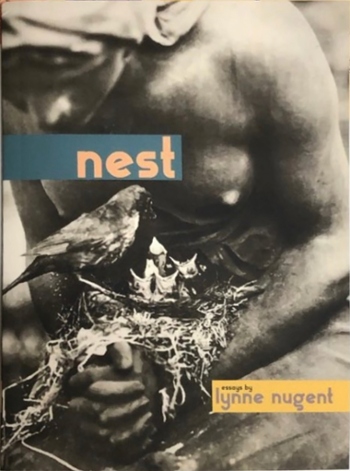 As the world shuts down and ultimately starts to reopen, Iowa City circles its figurative wagons, our institutions working to keep local artists and retailers engaged.

Prairie Lights delivers books for reviewers right to their doors.

I have the privilege of reading Nest, a series of heartfelt essays about life and parenting from Lynne Nugent, editor of The Iowa Review.

Nest is a thin tome, “pecked out,” the author says, “with one finger on an iPhone cradled in my hand while a baby slept against my other side.” Her essays are very personal, but they speak to a broader perspective of motherhood.

My own days of having a child fall asleep while nursing are long gone, but well do I remember the way that baby’s entire demeanor would change after they latched on and began to soothe, as described in the essay “the suck.” Nursing a baby is, as Nugent says, “exquisitely boring,” but also a strong act of physical presence and love for your infant.

Although the consuming job of mothering her two sons is the overarching theme of the book, Nugent also includes essays about herself in her roles outside that of mom: grieving daughter (“my grief is a student of the humanities”); woman whose husband has a medical condition (“the get-out-of-jail free card”); Korean language learner (“the year of language learning”). In all of these, too, she strives to make connections with others, reveling in relationships — with her departed father, her spouse, her Korean mother.

Nugent has a disconcerting way of referring to her children as “A.” and “D.” and her husband as “K.” Often, authors don’t use actual names of family members due to privacy concerns. But if this is her plan, it is negated by the fact that she mentions Alasdair, Damian and Kembrew in her acknowledgements.

The essays were written over a period of time and are not necessarily ordered, which means that the reader is not always sure which child she means in each essay. My mind likes to put things in order, so I see this as a drawback — but it is true that parenting, and writing, are not always straight and chronological lines.

Nugent’s essays speak to the urgency of early motherhood: the fear that if she dies today her child will not remember her (“the 781 days”); the to-do list that’s never complete (“running late”); the promises to oneself that seem both easy and impossible to keep (“lines from a journal I kept after my son was born and i promised myself i would write at least one line a day”). She writes beautifully of this time in a parent’s life, the early baby and toddlerhood days when years rush by but days last forever. It’s a joy to linger in these moments, to remember those endorphin-soaked early motherhood days.

It’s also a blessing to find something brief to engage the mind, a chapbook easily consumed even with COVID-brain — or new-mommy brain.

Nest is a collection that wants to be shared. I found myself wondering which friend or new mother would most appreciate its words, the evocation of memories of the times when we have protected our own children in our nests.

This article was originally published in Little Village issue 282.