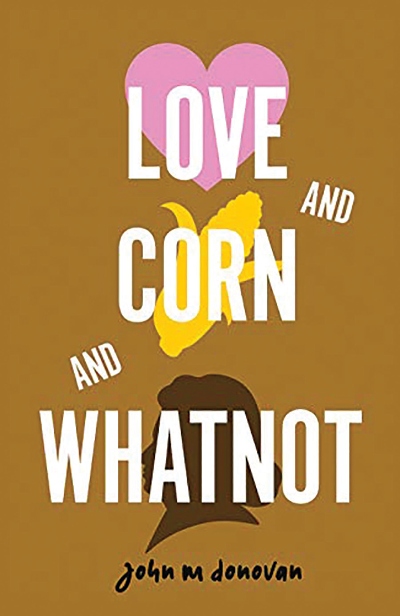 Parker Graham is uncertain in the ways that only a recent high school graduate can be.

In Love and Corn and Whatnot, John M Donovan revisits the world of his earlier novel Trombone Answers, but the arc of the main character’s coming of age stands alone and cohesive for new readers. As Parker Graham navigates college experiences, summer jobs and the intricacies of fleeting love, he lives within a relatable universal that evokes a nostalgia for a reader’s own late teenage years and early ’20s.

The book covers five years of the protagonist’s life. On the surface, it’s a funny and engaging exploration of growing up in the late ’70s and early ’80s. But there are threads of philosophy that sneak in. Parker is never content to navigate his own maturing, but is constantly questioning and comparing the ways that others maneuver through that same territory.

Satisfaction is at the forefront of his mind throughout the book, and he experiences confusion and even anger with friends who search for more. “I didn’t understand how Finley could hate his roots so vehemently,” he says of a good friend from high school, “but realized too that my own roots ran deeper than friends and family. … Being a good person in your little corner of the world mattered, just as it mattered to every other person in every other corner.”

Parker wants to be someone more, but not if it means losing his connections to land and community.

It’s intriguing, throughout the book, to pay attention to where Parker’s attention lands. He talks a lot about his romantic entanglements, but his relationships with his male friends are paramount. He is constantly defining and redefining himself in terms of those he likes and respects. And his sense of self is tied intimately to his understanding of his male friendships.

Donovan’s humor weighs heavily on the novel, characterizing Parker, an aspiring writer, as often seeming to try a little too hard to be observant and wry. But there are moments when Parker’s narrator voice slips and nuggets of beauty sneak through. Responding in kind to a girlfriend who says “I love you” offers this relatable ice pick to the heart:

“And when I said it back the words were like wet cement, falling out of my mouth, hardening on the way down, and disintegrating on the porch.”

Parker never climbs out of uncertainty, and he remains beholden to the influences of those around him. But his efforts to craft the person he wishes to become are entertaining to observe and Donovan’s empathy for his character evokes warmth in the reader as well, making for a pleasantly distracting read.

This article was originally published in Little Village issue 288.