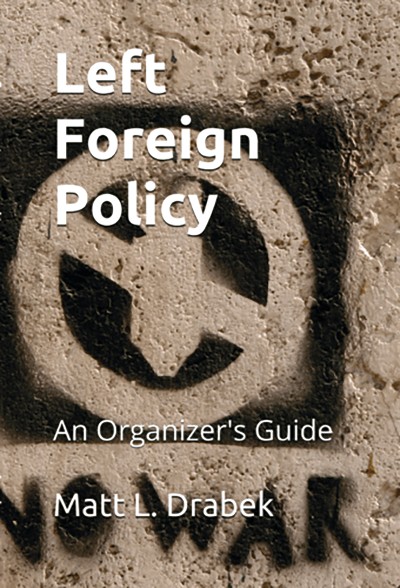 Matt L. Drabek doesn’t just provide tragic history lessons of American hegemony in his new book Left Foreign Policy: An Organizer’s Guide (Base and Superstructure Press). With references as diverse as Noam Chomsky and Star Trek: The Next Generation, he provides the context of ongoing developments that make this book timely. Of equal importance, he offers guidance on how to organize to help create a better world.

Drabek is an anti-war activist and organizer around working class issues based in Iowa City. He runs the blog Base and Superstructure, is an active member of the Iowa City Tenants Union and is the Secretary-Treasurer of the Iowa City chapter of Democratic Socialists of America.

He started the book last year, dipping into a wellspring of personal experiences from over two decades. Shortly after September 11, 2001, he was a college freshman at Indiana University when he had his “first taste of political activism” after meeting a “motley crew” of activists who organized a peace camp on campus.

“These were rich, valuable experiences,” Drabek writes, experiences which set him on “a path to a lifetime of leftist activism.” On the other hand, his time at the peace camp also “provided lessons in the shortcomings of activist movements, particularly anti-war activism.”

The leftists that Drabek refers to “… stand against capitalism and want to replace it with democratic ownership and control of the world’s economic system,” he wrote. “The left favors economic democracy as a replacement for the system of economic authoritarianism and oligarchy we call ‘capitalism.’”

While the left is in general agreement on various issues, there is a lack of consensus in terms of foreign policy. Constructing a necessary foreign policy consensus, based on four building blocks (international solidarity, anti-interventionism, pluralism and fighting global capital), could help build an integrated movement and advance leftist goals.

“Leftists must learn to take these experiences — the focused community-building events centered around activist circles — and broaden them to more people and larger communities,” Drabek writes.

“Through these principles,” Drabek writes, “the Left can connect the most visible manifestations of U.S. empire and hegemony to the everyday, less visible actions that form the substance of the Washington bipartisan foreign policy consensus. After the left connects these things, it can present a positive alternative of its own.”

This isn’t the last word on the subject, nor is it intended to be. The left will always have disagreements, Drabek notes. Left Foreign Policy is a scholarly yet accessible introduction on how to unite people who want to dismantle the war machine and organize for socialist causes but don’t know where to begin.

This article was originally published in Little Village issue 296.